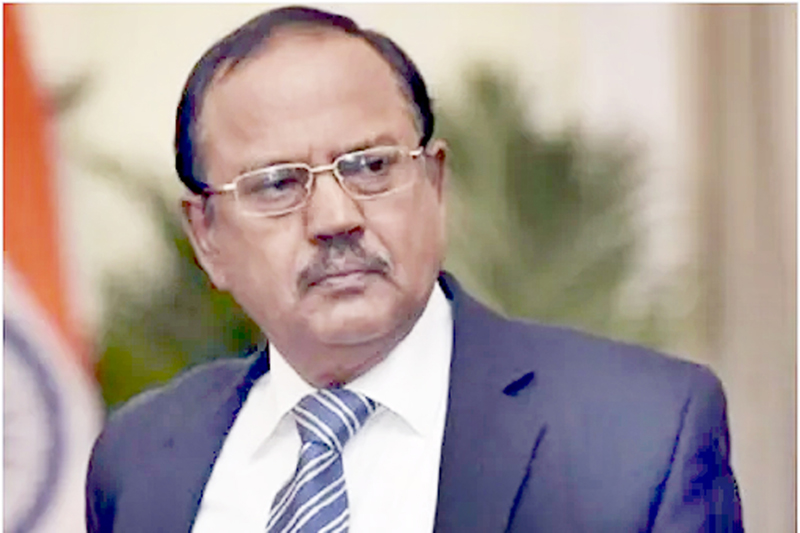 ‘Govt to go on offensive against militants’

National Security Advisor, Ajit Doval today said that the people of Kashmir are no more in favour of Pakistan and terrorism.
Highlighting the abrogation of Article 370 in 2019 in Jammu and Kashmir, Doval in an interview to news agency said that the mood and temper of the people of the Valley has seen a change and that the situation has changed for the better in the region after the special status of the erstwhile State was revoked .
“Post-2019, the mood and temper of the people of Kashmir have totally changed. People are no more in favour of Pakistan and terrorism,” Doval said.
On the question of terror attacks against Kashmiri Pandits, he said that the Prime Minister Narendra Modi-led Central Government had taken steps in the past to protect vulnerable sections and would definitely do more in the future.
“Yes, they are a vulnerable section and need protection. Government has taken various steps in the past and probably much more has to be done and that is being done,” said Doval on being asked about the safety of Kashmiri Pandits in the Valley.
The National Security Advisor said the country will go on an offensive mode against militants and make sure that their misdeeds do not go unpunished.
“The best thing is to go on offensive mode against militants and make sure they’re accounted for,” Doval said.
Assuring that the Government was taking steps to tackle the menace of terrorism, Doval said: “You don’t deal with terrorism, you deal with terrorists. We are tackling their equipment, weapons, explosives and money. We are battling on all fronts and in another few months, we will see results.”
According to Doval, the Government was taking steps to tackle the issue of terrorism and that now, only individuals were seen to be carrying out “lone wolf attacks.”
“We are trying to persuade them (Kashmiris), their families too are doing that. Some individual organisations are operated by their notions or beliefs or fidayeen and creating problems for us. We are fighting them with total resolve,” he said.
“Where is Hurriyat? Where are those bandh calls… those Friday hartals.. all gone. Some young boys are getting misled but we are doing our best to persuade them… some military organisations are there but we are fighting them with total resolve,” Doval said.
“We will not beg for peace at any term,” the NSA said over the shift in relations with neighbouring Pakistan since Narendra Modi became the Prime Minister in 2014.
“We can’t have peace and war at the choice of our adversary. If we’ve to protect our interests, then we will decide when and with whom and on what terms we will have peace,” Doval said.
He emphasised the country has not seen any terrorist attack in the last eight years except in Jammu and Kashmir, which has been facing a proxy war.
He also said India has “good relations” with Pakistan and it would like to have “normal” ties with the neighbour but “the terrorism threshold for terrorism is very low”.
Pointing out the long-pending territorial dispute with China, Doval said “We have made our intentions very clear to China. They are aware of the fact that we will not tolerate any transgression…”
There had been “unsavoury” incidents in 2020. India has tried to resolve a few issues through “talks”, “persuasions”, “negotiations”. “We are vigilant and we are able to protect our borders.”
Ruling out rollback of Agnipath scheme for recruitment in armed forces, Doval said that the Government’s move was “not a knee-jerk reaction that has come overnight” but has been debated and discussed for over decades.
He said several committees over the decades have suggested brining down average age of armed forces.
“There is no question of any rollback (of the Agnipath scheme). Let me tell you one thing. This is not a knee-jerk reaction that has come overnight. This has been debated and discussed for over decades,” he said.
“In 1970s, we had committees that talked about reorganisation and reforming the Army including the usage of manpower, technology and others,” he added.
Doval said under Agnipath scheme, every youth of this country who has got the desire and motivation and feels a sense of commitment to defend the country gets an opportunity. “His energy and talent are used to make this country strong,” the NSA said. (Agencies)