JAMMU, Sept 18: Hundreds of Kashmiri Pandits mostly relief holders staged a massive protest demonstration at Jagti township against the delay in the payment of monthly relief but their attempt to block the Jammu-Srinagar National Highway was thwarted by police, officials said.

Click here to watch video
The protesters came out from the Jagti township on the outskirts of the city and started marching towards the nearby National Highway, raising slogans in support of their demand for immediate release of relief payment for the month of August, the officials said.
They said the police stopped the protesters from marching towards the highway and persuaded them to disperse.
The protesters threatened to intensify their agitation if their monthly relief was not immediately released.
“The relief for the month of August was not released by the Relief Organisation till date, causing hardships to the displaced community,” a spokesman of the Kashmiri Pandit Relief Holders Association said.
He said this was for the first time in the past three decades that there was a delay in the release of monthly relief to them.
“We appeal to Lt Governor Manoj Sinha to look into the issue and ensure early release of the payment,” the spokesman said. Earlier the protesters including men and women with banners and black flags in their hands tried to march towards the National Highway to register their protest against what they called the callousness of the Government in releasing the relief for the month of August. Shouting slogans in support of their demand they alleged that Relief Organisation and the Government has unnecessary created the problem taking the thousands of relief holders to ransom.
The protesters jostled with the police in their bid to march towards the NH which was foiled by latter who put barricades in the way and did not allow them to move ahead.
However, one protester with a black flag in his hand managed to give the slip to police and went on NH to register his protest.
Later Additional DC Jammu, reached the spot and pacified the protestors. He assured them that the issue will be sorted out within three four days.
The protestors said that the condition of majority of relief holders is very miserable as they are not in a position even to arrange the life saving drugs for their ailing family members and termed the non payment of relief as a great human rights violation with them.
They warned to intensify the agitation in case the issue was not solved by next Tuesday. 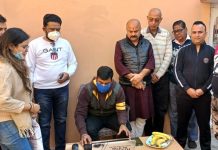