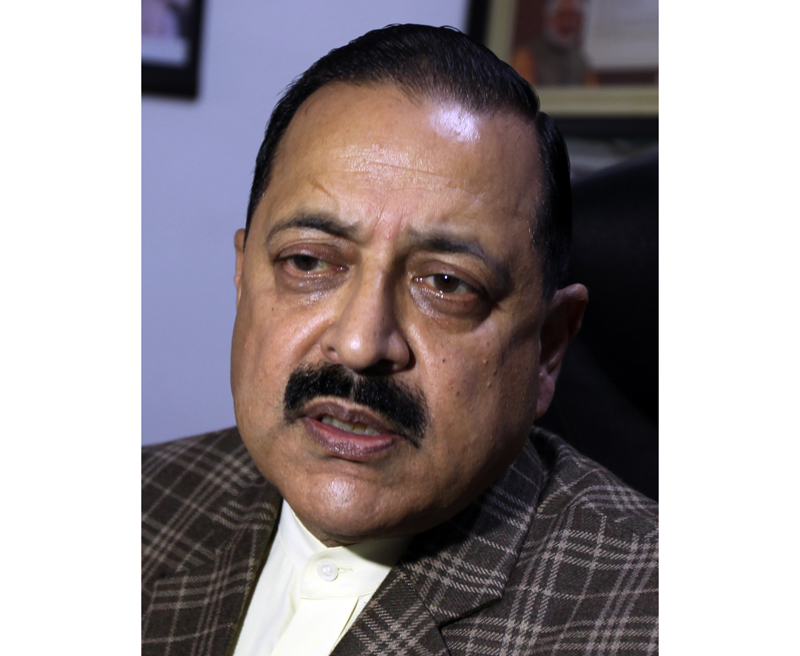 Excelsior Correspondent
JAMMU, Mar 3: Taking a strong dig at the Kashmiri leaders advocating Nobel Peace Prize for Pakistan Prime Minister, Imran Khan who ordered the return of brave Indian Air Force Pilot, Abhinandan Varthaman as a good will gesture and for promotion of peace in the Sub Continent, Union Minister, Dr Jitendra Singh today said it seems these leaders are launching a campaign for award of Nobel Prize to Pak Prime Minister so that they can claim Nishan-e-Pakistan for themselves.
Talking to reporters here today, Dr Jitendra Singh said it seems that these leaders by launching a campaign for granting Nobel Prize to Imran Khan, are expecting Nishan-e-Pakistan for themselves.
He said these Kashmiri leaders who are not worth while for any such award from India so they are demanding Nobel Prize for Imran Khan so that they can expect Nishan-e-Pakistan for themselves in lieu of that.

Click here to watch video
Dr Jitendra Singh, in response to a question on banning of Jamaat-e-Islamia in J&K and its opposition by some leaders, said that those who oppose the banning of Jamaat or demand Nobel Prize for Pak PM have their own axe to grind especially eyeing the coming Lok Sabha elections.
Without naming any body, he said these leaders have exploited the Kashmiri people for last 70 years just to promote their dynastic rule and they are repeating the same. He said that let us leave it to Union Home Ministry and all of us should cooperate with the Government decision in this regard.
He, in response to another question that State Government has said it has not banned the schools of Jamaat as yet, the Union Minister said let us leave this decision to Governor and his Advisors. He said the Modi Government has taken a drastic action to quell terrorism in the Valley, who simultaneously tackled Pakistan in a befitting way and at home launched crackdown on the terrorists and separatists.
Dr Jitendra Singh said people of the country have lot of faith and trust in PM and they are solidly behind him and support each and every action taken by him.
On politicizing of India’s action on Pakistan, Dr Jitendra Singh said it is Congress and not BJP which is politicising the issue. “They are demanding proof and this way they suspect the action of Indian Army and Air Force just for their vested interests. Should our valiant forces give proof to opposition leaders of their valour and bravery? he asked.
He said the retaliation by Indian security forces to Pakistan’s misadventures has never been seen in last three decades and the people of International Border and Line of Control as has been done during last five years of Modi Government. This too was admitted by people living on IB and LoC and they say that they have never seen such kind of forceful action from Indian side, which they saw during the last five years of Narendra Modi Government and Pakistan has also felt heat of the same, he added.
Lambasting Congress for attacking Narendra Modi Government, Dr Jitendra Singh said they have nothing against Modi to tell people so they are maneuvering the things knowing better that there are no takers for the same among the masses. The media as well as the viewers are awake now and their allegations are not carrying any weight, he added.
He said those who are leveling allegations on BJP are desperate to do so because they want to take political mileage of the same.
Responding to another question that one Congress leader has said that Abhinandan was appointed in Air Force during Congress rule, Dr Jitendra Singh said that Congress ruled the country most of the time and hence they (Congress leaders) can go back and take credit that Abhinandan was born during their rule.