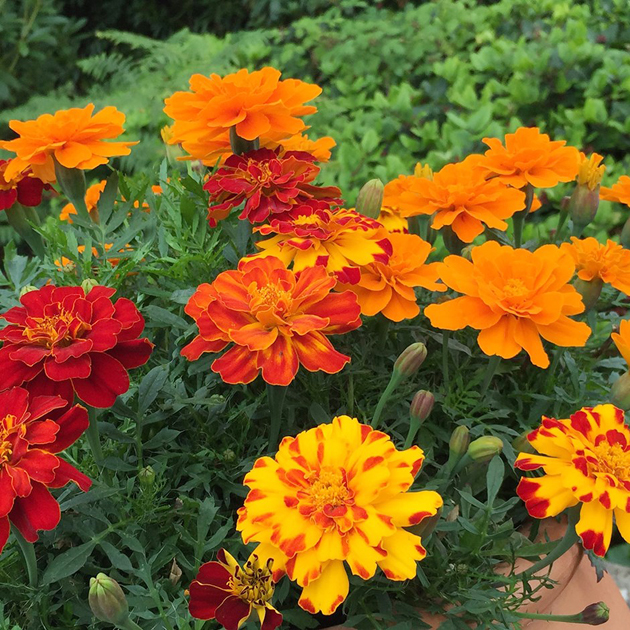 Dr. Banarsi Lal and Dr. Vikas Tandon
Kanjali village is about 36 km away from world famous religious place Katra in Reasi district of Jammu and Kashmir.
The village is around 6 km. away from Krishi Vigyan Kendra (KVK), Reasi. This village is situated in the remote area of Reasi district and is lacking  road and communication connectivity. There are around 150 families in the village. The major occupation of the people is agriculture and there is a natural source of irrigation in the village where the marigold cultivation can be done. There are two Govt. schools, three Angadwadi centres and one Panchayat Ghar in the village.  There are many progressive floriculturists in the village who are producing the marigold flowers at a commercial level. The village is having around 150 hectares of land. Initially the villagers were growing maize, wheat and few local varieties of vegetables as their forefathers were doing. They were using the traditional agricultural technologies in their fields and monkeys and wild boars were the great threats in their fields. All the agricultural produce was consumed by their families with very little surplus to sell. Their farming system was deteriorating and they were unable to mitigate the basic needs of their families. Some farmers of the village were on the threshold to leave the agriculture profession.
Before the KVK interventions the farmers of Kanjali village were doing the unscientific agriculture on a small scale. They were endouvering to increase their farm income. They were using the local resources and were growing the maize, wheat, fruits, vegetables, marigold etc. with the traditional methods resulting in the poor yield of the crops. They were lacking the scientific knowledge in agriculture. After establishing the Krishi Vigyan Kendra (KVK), Reasi near their village, they came in contact with the  scientists.  farmers. KVK scientists started regularly visiting their farms and developed a good rapport with the farmers of this village. A benchmark study was conducted by the KVK scientists in the village. The farmers were guided and motivated for the scientific marigold cultivation. Scientific cultivation of marigold changed their life. KVK, Reasi also introduced some new varieties of marigold in the area gave some scientific recommendations on commercial marigold farming. Marigold cultivation helped to overcome the problem of monkeys menace in the village as the crop is not damaged by the monkeys.
Before KVK interventions farmers of Kanjali village were growing only maize, wheat and few vegetables by using the traditional technologies and they were lacking the technical skills and knowledge on agriculture. There was heavy infestation of diseases and insects-pests and farmers were earning very less as their crops productivity was low but with the commercial marigold cultivation   they raised their annual income substantially. By growing the marigold crop, the farmers are generating more income as compared to their traditional farming.
By observing the successful results of marigold crop in Kanjali village, the other farmers of the district villages such as Rajwal, Bhabber, Bhakta, Sool, Kansi Patta etc. are also showing keen interest in marigold cultivation. With the introduction of scientific technologies for marigold cultivation the farmers are able to generate extra income and employment. With the generation of extra income, the farmers developed confidence to mitigate their basic problems.  A self- reliance and entrepreneurial spirit has been developed among the farmers. Their new attitude towards scientific marigold cultivation has been developed. Kanjali farmers’ success in commercial floriculture is inspiring the other farmers of the area and they are shifting towards the commercial floriculture in a scientific way for better economic returns. The other farmers of the area take opinion from them about the scientific marigold cultivation practices. With the scientific marigold cultivation, the socio-economic status of the farmers has been improved.
Year- by- year they have started to generate more income and employment by growing the marigold crop at commercial level. Number of farmers including  Shail Singh, a progressive floriculturist in the village was highly impressed with the technical guidelines given by the KVK scientists and presently he is guiding the other farmers of the area on commercial marigold cultivation. He grows marigold in around 60 Kanals of the area. He has established one vermicompost unit at his home. There are many other farmers in the village who have become entrepreneurs in floriculture like  Shail Singh. They used to sale their marigold flowers at world famous place Katra, Udhampur and Jammu. Now the village farmers have developed confidence in themselves.  The village farmers have become an example of success and motivating factor for other farmers in adjoining areas.