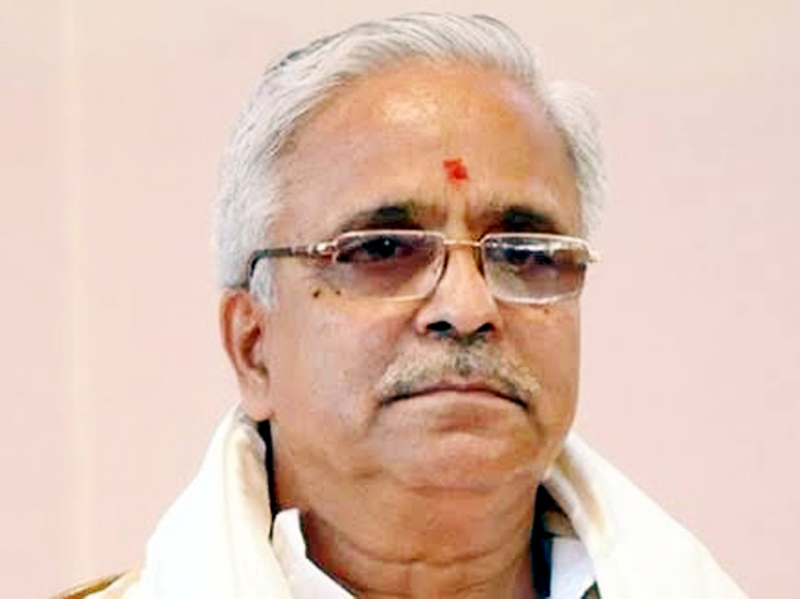 Opinion divided in BJP over timing of Assembly polls

Avtar Bhat
JAMMU, Dec 25: RSS Sarkarivah (national general secretary), Bhaiya Ji Joshi, who arrived here this morning on two days visit of Jammu, during his hectic schedule of the day held meetings with leaders representing various Sangh off shoots and BJP and discussed the prevailing political situation in the State and organizational matters with them.
The senior RSS leader, who held a meeting with top Sangh functionaries, BJP Core Group members, leaders of VHP, Bajrang Dal, Ek Laviya organization, Sanaskar Bharti and Shiksha Bharti of the State in the evening discussed varied issues concerning the State and nation with them.
Sources said, besides the law and order situation, border skirmishes, issues of Rohingyas and demography and the political situation in the State, the deliberations were also held on coming Lok Sabha and Assembly polls. In addition to it, the issues of West Pak refugees who are craving for citizenship rights since 1947, PoJK refugees and Kashmiri displaced people were also discussed in the meeting.
Prior to meeting with RSS senior leader, BJP Core Group met at the residence of Party’s chief spokesperson, Sunil Sethi at Maheshpora, Bakshi Nagar to devise their strategy regarding various political issues confronting the State and party’s stand on holding of Assembly elections. There is a divided opinion in the State BJP over timing of Assembly poll, sources added.
While a section of the party wants that the Assembly poll be held simultaneously along with Lok Sabha elections in the State another section is of the opinion that they should be deferred and Governor’s rule should continue for the time being.
Sources said the legislators from the Jammu city favoured holding of Assembly elections along with Lok Sabha poll while those of far flung and remote areas wanted that, they be deferred so that the developmental schemes launched by them in their respective constituencies are completed and people see something has been done on ground.
Sources said Central leadership of BJP has conducted survey through its various agencies regarding the performance of BJP MLAs in their respective constituencies and this feed back was also given to Sangh leader by State BJP leadership. The survey has also alarmed the party about the public resentment against its legislators in various constituencies, sources added.
Sources said this report is also becoming a ground for deferring the Assembly poll in the State. Moreover, the control over the situation and militancy during the last six months of Governor rule and total decrease in stone pelting and violence incidents in Kashmir has also given a point to some BJP leaders to make a forceful argument on deferring of Assembly poll in the State till restoration of complete normalcy.
Sources said this point was also brought to the notice of RSS senior leader by some BJP leaders.
The Core Group members who met the Joshi included BJP, president, Ravinder Raina, its organizational general secretary, Ashok Koul, Union Minister, Dr Jitendra Singh, Speaker Assembly, Dr Nirmal Singh, MP, LS, Jugal Kishore Sharma, MP (RS) Shamsher Singh Manhas and former Deputy CM, Kavinder Gupta.
Later Ravinder Raina and Ashok Koul held close door one to one meeting with Joshi late in the evening, sources added.
Sources said among the prominent Sangh and VHP leaders who met RSS senior leader included Prant Pracharak, Rupesh Ji, RSS leader, Brig (retd) Sucheet Singh, Purshotam Dadichi, Seh Prant Karivah, Surinder Kumar, Avtar Ji and VHP president, Leela Karan Sharma and they discussed varied issues with him.
The RSS leader during his meeting with them urged them to increase the border assistance programmes for the welfare of border people. He said the people residing on borders are playing same role as the security forces. He highly praised their valor and sacrifices.
He also stressed on managing tours of younger generations of the people to border areas to imbibe the spirit of patriotism among them. The border people are an inspiring force for us all in this regard, he added.
Joshi also stressed that the border people be encouraged to start development programmes in their own respective villages.
In the morning, while holding deliberations with Shakha Parmukhs of different areas of Jammu, the RSS leader sought their opinion on their performance and response of people about Shakhas.
He said Swayamsevaks should establish Shakhas which is the main base of Sangh. He said Sangh Shakhas are the basic mantra for a Swayamsevak and the Sangh prayers in the Shakha should be recited by heart in pure form to get maximum benefit.
Highlighting the importance and significance of Bhagwa Dhawaj (Sangh Flag), he said it acts as Guru for a Swayamsevak which imbibes in him spirit of sacrifice for nation and develops the quality of selfless service in him.
During the programme, he also interacted with children going to Shakas in the morning.
The Sangh leader will meet the BJP and RSS leaders from Kashmir and Ladakh tomorrow morning before visiting religious shrine of Purmandal to lay the foundation of a new welfare project there. Later he will meet prominent citizens at Jammu in the evening before returning to the Union Capital.