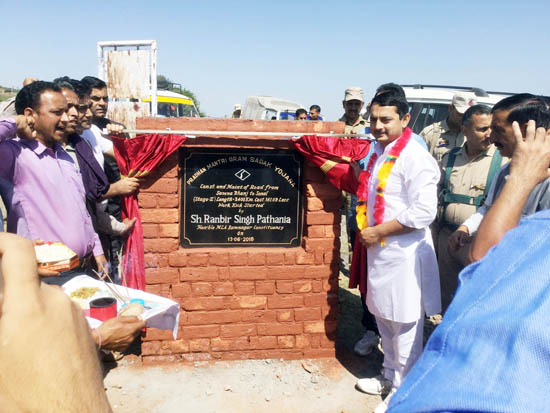 Excelsior Correspondent
RAMNAGAR, June 13: MLA Ramnagar, Ranbir Singh Pathania today kick-started work on three major projects under PMGSY, stage I and II.
These included Sonel to Samnabanj road (Length 3.0 km), likely to be completed at an estimated cost of Rs 161.09 lakh; Kulwanta (BB Ramnagar) to Joffer-1 (Length 10.60 km) likely to be completed at an estimated cost of Rs 548.39 lakh, and Joffer 1 to Marta Stage I (Length 11.900 km) likely to be completed at an estimated cost of Rs 676.51 lakh.  Pertinently Joffer has suffered neglect at the hands of successive Governm-ents. It has been the long wait of nearly 54 years for the public of Joffer to get the work on this road started.
Pathania gave green signal to these 3 road projects and stressed upon the executing and contractor agencies to ensure timely completion of these road projects without compromising the qualitative aspect of the work. He reiterated his commitments regarding provision of electricity, drinking water and metalled road for each and every hamlet of the constituency.
On the occasion, the MLA announced construction of platform (for morning assembly), 50 desks, and protection work for HS Joffer out of his CDF. He said that adequate teaching staff will be provided to MS and HS Joffer. He also announced construction of road up to PHC Joffer.
Earlier, during the day, Pathania convened Janta Darbars enroute at various places, Naoul, Kulthian. Marta, Ujh Pull and listened to the various grievances aired by the public.
On the spot directions were issued for the resolution of most of the grievances related to water, electricity, ration supply etc. Pathania advised the Government Deptts to increase their presence in the field and be responsive to the needs of public.
He said that present Government under the decisive leadership of PM Narendra Modi is working for Sabka Saath; Sabka Vikas and developed India by 2022.
Pathania was accompanied by officers of various line departments, party functionaries and general public in large numbers. Prominent among those, included Shiv Charan, Prem Nath, Jagmohan, Kuldeep, Shankar, Ranjit Singh, Master Gopal, Subash and Abdul Ghani.