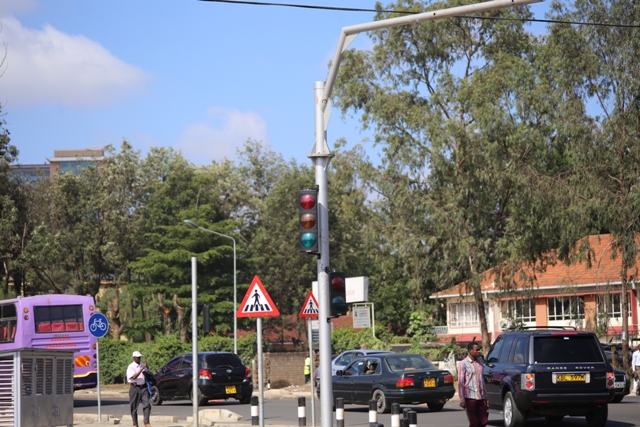 No focus on gearing up work on projects approved under AMRUT

Traffic cops yet to be trained in handling ITLS

Mohinder Verma
JAMMU, Sept 21: Establishing that there is no focus on gearing up work on the projects approved under Atal Mission for Rejuvenation and Urban Transformation (AMRUT), Jammu Municipal Corporation has failed to meet the deadline for making functional Intelligence Traffic Light System funded by Union Ministry of Housing and Urban Affairs.
Official sources told EXCELSIOR that under Urban Transport Component of AMRUT Scheme, the Union Ministry of Housing and Urban Affairs approved the project for installation of Intelligent Traffic Light System (ITLS) in different parts of Jammu city and its immediate peripheries during 2016-17 financial year and accordingly Jammu Municipal Corporation was assigned the task of project monitoring.
The work on the project aimed at upgrading 30 already installed traffic signal lights and installation of new ones at 34 more locations with CCTV cameras and control system was started in January 2017 by Delhi Integrated Multi-Modal Transit Systems Limited (DIMTS)—a joint venture of Government of National Capital Territory of Delhi and IDFC Foundation, which was selected for the execution of the project.
Ever since the clearance of the project under AMRUT, numerous meetings of all the concerned authorities were convened to remove the bottlenecks and ensure smooth pace of the work. But, the work could not be geared up in order to meet the deadline for completion of project, sources said.
“In the District Development Board meeting of Jammu district taken by the then Governor N N Vohra on July 26, 2018, it was conveyed that Intelligent Traffic Light System will be completed by ending August 2018 but the deadline has been missed due to poor monitoring”, they further said, adding “funding was not an issue in this project as 100% earmarked money was released by the Union Ministry of Housing and Urban Affairs well in time”.
They disclosed that though intelligent traffic lights have been installed at all the 64 locations but only half of them are operational at present. Moreover, the operational lights are being handled manually in the absence of command control room, which is yet to be made functional by the DIMTS.
“It is difficult to specify time-frame for complete installation of Intelligent Traffic Light System and making it operational as it would be only after making command control room functional DIMTS will provide training to the Traffic Police personnel for proper handling”, sources further informed.
When contacted, a senior office of Traffic Police said, “we are eagerly waiting for completion of the project as it will be of immense help in regulating the traffic in better way”, adding “we have not been communicated any date for making functional command control room and for holding training sessions for Traffic Police personnel”.
“It is imperative to complete the project in all respects before Annual Darbar Move when the number of vehicles will increase considerably”, he further said.
The new traffic signal lights will help in monitoring the traffic from the central control room using cameras, sensors and technology and detection of traffic volume on real time basis and change in signal lights accordingly.
Moreover, the ITLS will help in detection of emergency vehicles such as ambulances and alterations in signal lights accordingly to facilitate smooth passage. The new traffic light signal system will have certain benefits like less waiting time for motorists due to fast response time, excellent operations during emergency situations, increasing the traffic handling capacity and more effectively checking jamming on the roads.
“The failure to meet the deadline has once again put a question mark on the functioning of those at the helm of affairs in the Jammu Municipal Corporation as it was purely their responsibility to ensure fast pace work”, sources said.
The Jammu Municipal Corporation is already facing severe criticism for its failure to utilize large number of tractor operated sewage suction machines purchased by spending huge money under Atal Mission for Rejuvenation and Urban Transformation and lying in the yard of Urban Environment Engineering Department (UEED) at Narwal during the past nearly two years.