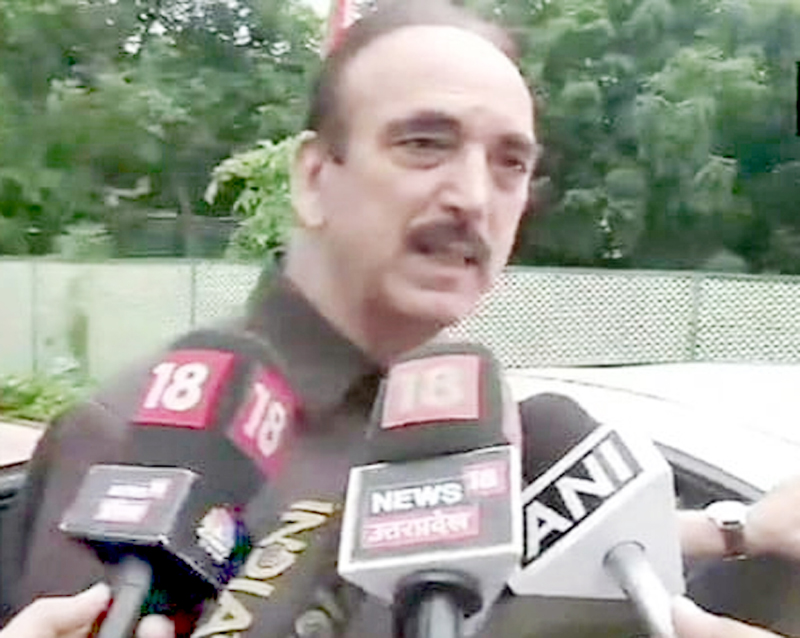 LoP detained at Airport, sent back to Delhi

JAMMU, Aug 8: Leader of Opposition in Rajya Sabha and former Union Minister, Ghulam Nabi Azad today alleged that Jammu and Kashmir State has been massacred by the Modi Government and people of this State have lost their identity after becoming part of a Union Territory from one of the largest and important States of the country one time.
Azad, who was sent back to the Union capital from Srinagar airport after being detained there for five hours by the security agencies, told media-persons at Delhi that being Rajya Sabha member and representative of the people from Kashmir, Jammu and Ladakh regions, he had gone to Kashmir to meet the people who had voted for him and take review of the prevailing situation there. When he reached Srinagar Airport at 11.30 am, he was not allowed to move out. The DC and SSP Srinagar came to him and told that they had instructions from the top, not to allow him to meet any body and asked to go back in the same flight.
“But I told them that I have come here to meet my people. I kept waiting there at the airport along with PCC president Ghulam Ahmed Mir and was made to move back at around 4.30 pm in the flight and reached Delhi at 6 pm. It is very unfortunate that entire State has been sealed/ locked down and nobody is being allowed to move out of their homes or meet anybody. Even they can not move to the house of neighbours or talk to anyone. Is it the way to rule the country or the State?” Azad asked.
Accusing BJP-led Central Government of having “mercilessly massacred” the State by breaking it into two parts, Azad said if the Centre wanted to implement its decision to take away special status of Jammu and Kashmir by force, was it justified and fair to put entire region and the State under lockdown?
Azad said all the laws made by the State earlier have been scrapped, Article 370 has been diluted and Article 35-A has been taken out. One of the most famous State in the world has been divided into two UTs, the AICC leader maintained.
Azad alleged that the people of Jammu and Kashmir have lost their identity and the pride of the state, which once had a “Maharaja” and a Prime Minister and later for 18 years had the pride of having the President (Sadr-e-Riast). The pride J&K had a Governor and a Chief Minister. Today, it will have only a Lt Governor. It is shame on the part of this Government that this pride has been lost,” he said.
Responding to a question, Azad said he represented Jammu and Kashmir in Rajya Sabha, and it was his right to visit the State and meet those who had voted for him. As an elected member to Rajya Sabha by the Legislators from Ladakh, Kashmir and Jammu, he had a duty to perform towards his voters in the J&K State.
“May be, Modi sahib wants to implement the new ‘black law’ by force, by imposing curfew in 22 districts and then govern. What kind of governance is this,” Azad, a former J&K Chief Minister asked, accusing the Government of claiming that people are celebrating in the State.
“They have ruined the State and they should be ashamed of doing so. The BJP has ruined the entire country first and now they have finished the State of Jammu and Kashmir,” a visibly furious Azad remarked. Azad revealed that after crossing Pir Panjal the aircraft flies low in the Valley. While flying from Qazigund to Srinagar he saw that not a single vehicle was on the road in the entire stretch of 80 kms of National Highway. He said such a situation, has never been seen earlier even during the 1965 and 1971 wars, as well as during the 1999 Kargil war.
“For the first time in the history, we have witnessed this. Even during curfew, such a situation was never seen there earlier,” Azad maintained. He said the passengers at Srinagar airport said that no one is allowed to go out of their homes and visit even neighbours. Replying to another question by a scribe, Azad said the people who had food with National Security Advisor Ajit Doval at Shopian were paid off.
“It is not big thing, you pay money and get anything. You can not get if free on the highway,” Azad said. It is pertinent to mention here that NSA Ajit Doval on Wednesday undertook a visit to the militancy-infested south Kashmir and was seen eating food on road side and talking to locals. The pictures and videos went viral on social media. “Paise dekar aap kisiko bhi saath le sakte ho (Anyone can be brought along with money),” Azad said when asked about Doval’s visit.
Azad later sought to clarify his position saying the food was not free and must have been paid by someone. He, however, refused to comment on his colleague Karan Singh’s remarks taking a stand different from his party’s, saying he does not agree with a blanket condemnation of the Government’s decision on Jammu and Kashmir and pointed out what he called were its several positives.
Referring to remarks of Ladakh MP, Azad said, Kargil people are in favour of Article 370 and 35-A and those from Leh district never supported 35-A. “It is not fair and true to say that people from entire Ladakh are happy and celebrating abrogation of Articles 370 and 35-A, Azad claimed.