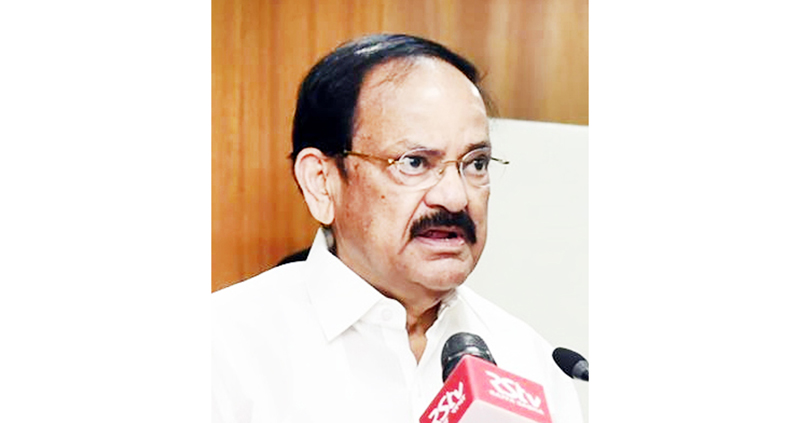 NEW DELHI, Jan 24:  Vice President M Venkaiah Naidu today said Jammu and Kashmir’s accession to India is “total, final and irrevocable”, and asserted that Article 370, which gave the erstwhile state special status, was a temporary provision that had outlived its purpose a long time back.
Delivering the Sardar Patel lecture on governance, Naidu called upon all Indians to work together to usher in the ‘Ram Rajya’ envisioned by Mahatma Gandhi in which, he said, there is all-round inclusive growth without poverty, discrimination, inequality, illiteracy and hunger, according to an official statement.
“Every citizen must strive to protect the unity, safety, security and sovereignty of the country,” Naidu said after paying tributes to India’s first home minister Vallabhbhai Patel, who is credited with the integration of hundreds of regions with the Union.
The accession of Jammu and Kashmir to the Indian Union is “total, final and irrevocable”, the vice president said, adding that “Article 370 was only a temporary provision and it had outlived its purpose long back”.
The Modi Government had last year abrogated the article’s provisions that gave special status to the erstwhile state of Jammu and Kashmir and had bifurcated it into union territories Jammu and Kashmir, and Ladakh.
Praising policies and programmes such as ‘Beti Bachao, Beti Padhao’, Ayushman Bharat, Goods and Services Tax and ‘Swachh Bharat’, Naidu said they are aimed at accelerating progress and empowering the people.
The Vice President also called for a total war on corruption and described it as a “major canker” that skews growth and development, deepens poverty and increases inequality, according to the statement.
He asked the bureaucracy to be more proactive and ensure that there is no gap in the intent, execution and delivery of various services to the people.
Observing that it is critical for state institutions to be agile, adaptable and resilient in the rapidly changing 21st century, Naidu called for strengthening implementation of programmes, improving competence and credibility of institutional structures, and adopting a work ethic that keeps national interest at the top and public welfare at its core.
Wondering whether degeneration in moral and social values in society has led to a general decline in the functioning of public services at every level, he called for introspection and said it is imperative to initiate a movement of ethics at all levels of governance.
There is a need to foster public trust in institutions and the integrity of public officials, while injecting greater accountability into decision-making, Naidu said.
“I feel that it is imperative that a movement of ethics is initiated at all levels of governance of the country,” he said.
The lecture was organised by the IC Centre for Governance and Rajya Sabha Deputy Chairman Harivansh was also present at the event. Former Cabinet Secretary and former Jharkhand Governor Prabhat Kumar is the president of Centre. (PTI)