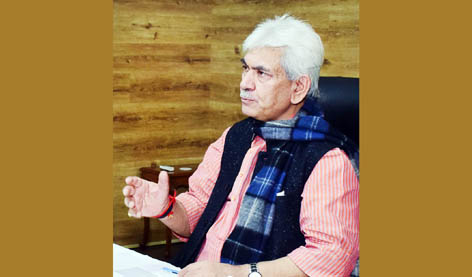 ‘Villages core of our economic setup’

Excelsior Correspondent
JAMMU, Dec 4: Villages are at the core of our economic, social, and political setup; they have had an immense role in our development in the last 73 years. With the development of villages, we hope to move from “Gram Uday” to “Bharat Uday”. Lieutenant Governor, Manoj Sinha made these remarks during his address at the 2nd State conclave of Rashtriya Sarpanch Sansad, through virtual mode.
The conclave was organized by MIT School of Government (MIT), Pune. Union Minister for Road, Transport & Highways and Micro, Small and Medium Enterprises, Nitin Gadkari; Founder, MIT School of Government, Rahul Karad and Sarpanches from across the country graced the virtual event.
Sinha observed that the 3-tier Panchayati Raj system was non-existent in J&K. However, with the recent developments, we have made sure to add district-level Panchayati institutions to the village-level & block-level system. It is now the true form of grass-root democracy as existing in other parts of the country, he said.
After a deficit of good administration for decades, J&K is now heading for a brighter future. Panchayats have a huge role to play in the developmental process. Only strong will, community participation, unity and good governance can help us achieve the goal of developed villages, he added.
During the address, the Lt Governor said that Gandhi ji too believed in creating self-sufficient villages with self-governance. “In this regard, we are geo-tagging a variety of village produce, installing food processing plants and threshers in villages, and providing tractors at subsidized rates to promote farm mechanization”.
Sinha highlighted the recent interventions made by the J&K Government to fill gaps between people’s aspirations and delivery with the help of PRIs. All districts were provided Rs 2.5 crore and every Panchayat another Rs 10 lakh to finish incomplete works. Apart from this, every Panchayats have funds under MGNREGA and 14th FC.
He also underscored that Functions, Functionaries, Finance and Framework help operate a Panchayat. The integrated approach to institutionalize and make it an integral part of our Panchayati Raj setup has been aptly exhibited by the Back to Village programmes.
Under the Back to Village programme, the officers visited villages, spoke to the public, and took the feedback of the on-ground development themselves. A framework was prepared under which different stages of Back to Village programme- Jan Abhiyan, Unnat Gram Abhiyan and Jan Sunvaai Abhiyan, were conducted. Wednesdays were designated for public outreach and promotion of Governmental schemes under the initiative. During the period, the public was delivered with services like Aadhaar Cards, Kisan Credit Cards, JK Health Scheme Cards, MGNREGA wages, and many others, he maintained.
“One of our motives was to provide employment opportunities to the village youth, and making a move ahead in the same direction; two youngsters were selected from every Panchayat and were provided with assistance by the administration for setting up their entrepreneurial project. We were positive that every one of them would provide employment opportunities to at least 8 other youth. We have exceeded our initial target of 8600 and finally provided assistance to over 12 thousand youth to set up their own businesses”, said the Lt Governor.
He added that a decision was taken under which every Panchayat was provided two large dustbins and sanitation workers designated under MGNREGA funds, sports kits, and playgrounds were provided to help nurture sporting talent in our villages. Similarly, more than 890 vacant Government buildings were identified for use of Panchayats according to their needs. “It is due to this action-based framework that we were able to complete more than 125 works, within 100 days, which were being delayed for over a decade”, the Lt Governor affirmed.
Emphasizing on speedy redressal of public grievances, Sinha observed that earlier there was no institutional mechanism for grievance redressal of the public. “As such, we took the initiative of “LG’s Mulaqaat-Live Public Grievance Hearing” under which, every month, I meet individuals from across the UT, listen to their issues/concerns, and try solving them on the spot. During 21 days of Jan Abhiyaan, 20 thousand, out of 40 thousand grievances were redressed on spot, while much of the rest have also been redressed in a time-bound manner. Women are also being empowered and are already participating in Panchayats’ functioning actively.
“We are going to launch a web portal for a live review of projects in remote Panchayats. It will help in monitoring all Panchayats of the UT”, he maintained.
J&K is number one among all the States and UTs as far as performance in PMGSY is concerned. In first of its kind initiative, the Government has extended Rs 5 lakh of Health Insurance without any discrimination. Many such initiatives have been taken by the UT Government aimed at meeting the aspirations of the people, said the Lt Governor.