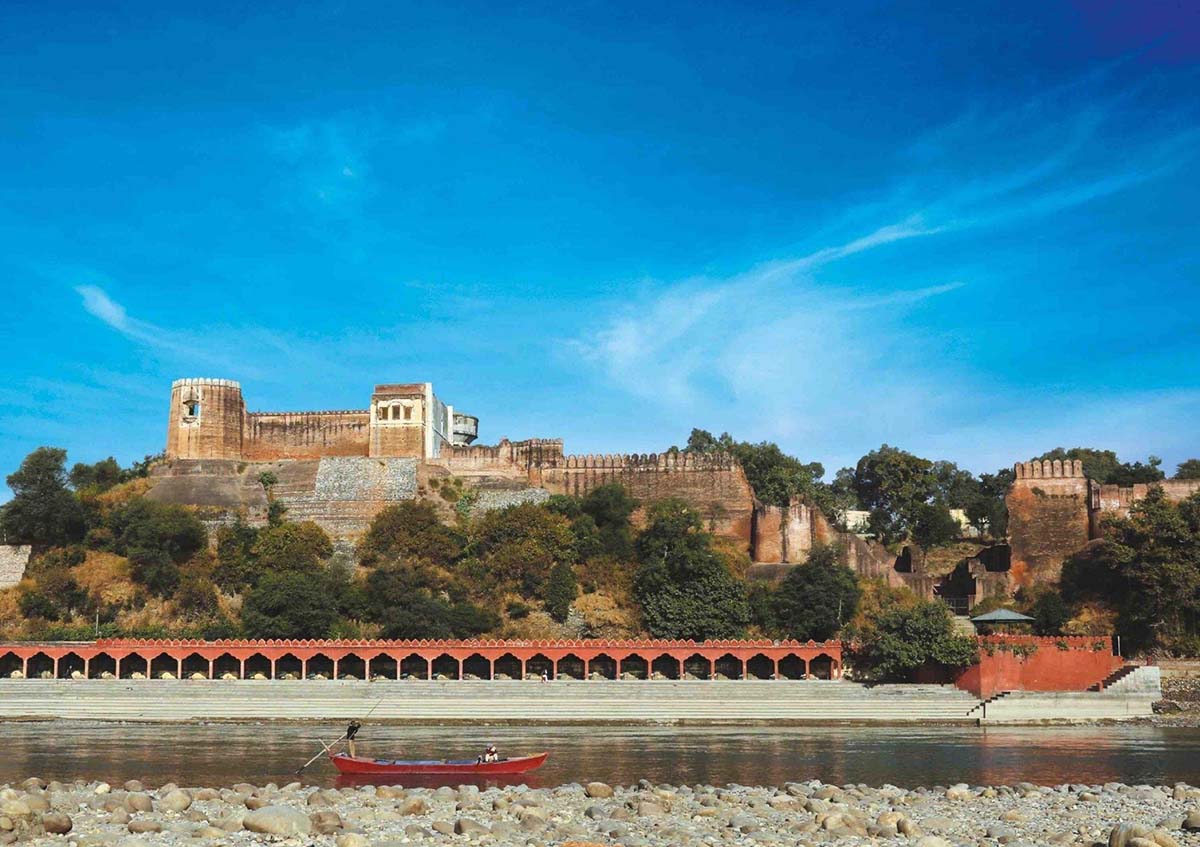 Rajesh Dutta
Akhnoor, popularly known as Virat Nagri in the ancient times, finds a place of pride in the history for its splendor, antiquity and historical importance, whereas, the Jia Pota Ghat on the right bank of river Chandrabhaga is the crowning glory of this beautiful ancient town. Historical facts of this ancient town revealed that Jia Pota Ghat is one of many ghats situated on the right bank of Chenab river which has a great significance.
Akhnoor is a picturesque town with the river Chenab in the front and the rolling hills of the Shivaliks in the backdrop. Archaeological excavations carried out at various places in and around Akhnoor reveal that it was the last Harappan city from where the Harappans used to collect timber.
Interestingly, the Jia Pota Ghat, had great significance and got its name from the Jia Pota tree whose botanical name is ‘Putranjiva Roxburghi’ of Euphorbiaceae family. It is believed that in 1957, the original Jia Pota tree got uprooted due to floods in the Chenab river and ultimately got washed away. However relief can be sought in the fact that a few specimens of healthy Jia Pota trees are flourishing in the adjoining Jia Pota Park developed by local Government in 1999. The findings in the past revealed that this is the place where an event of supreme historical Punjabi ruler gave Raj Tilak to his most trusted and loyal Dogra General Gulab Singh as Raja of Jammu region at Jia Pota Ghat on June 17, 1822. To celebrate the coronation day of Maharaja Gulab Singh, a commemorative mural has also been installed by then ruler at Jia Pota Ghat, depicting the historic scene of Raj Tilak.
Historians further mentioned that the importance of this place lies in the fact that Jia Pota Ghat is probably an eyewitness to the march of civilization since existence of the early man. Moreover, according to Archeological Survey of India, many historians consider Akhnoor as the northernmost point of Indus Valley civilization. It is also assumed that in medieval times it was a notable trading post where exchange of goods from plains and adjoining hill regions was undertaken.
The mighty river Chenab is one of the five rivers of the Punjab where historians believe that Vedas were composed by the Aryans and this old ghat and its neighboring settlement may have seen the coming and spread of the Aryans. The ghat in all likelihood is a witness to rise and fall of Kushans and Buddhism. Just one kilometer upstream of the ghat has the remains of a Buddhist monastery and Stupa at site called Ambaran dating back to 1st century A.D to 7th century A.D, which today has become the spotlight of great historians in general and followers of Buddhism in particular.
Recognizing the strategic significance of the place, it was Raja Mian Tej Singh who started the construction of the fort made exclusively of bricks of different sizes overlooking the Jia Pota ghat. Later on, the ghat also became an authentication to the ascendance of Dogras in the region. The ghat has remained a foremost centre of pilgrimage. It has a Devsthan of Baba Kahi where on a platform holy Soungals i.e. symbolic chains of the Devta are kept. According to a legend, Kahi Devta, one of the most renowned son of Vasuki Nag brought the waters of river Chanderbhaga to the barren region of Akhnoor and then was crowned as its king for his achievement. There is a belief that the day river water swollen by snowmelt of the scorching summers touched the holy Soungals of Kahi Devta, the monsoons would land on the arid lands of Jammu region. During the holy month of Magh, the devotees take a holy dip in the river Chenab at the ghat to purify themselves of their sins. The holy dip taken before dawn under starlit sky is considered auspicious.
Sankranti of every month of the Hindu calendar also witnesses a huge rush at this place. Devotees especially women hailing from different parts of Jammu region gather together at the ghat. Inspired from Ganga Arti at Haridwar, the local enthusiasts are now organizing evening Arti at Jia Pota on every sankranti which is generally attended by a huge number of devotees.
The Department of Tourism has started organizing cultural events during Baisakhi Mela at Jia Pota Ghat which is a step forward to encourage religious and cultural tourism in this area.
(The author is a freelance writer)