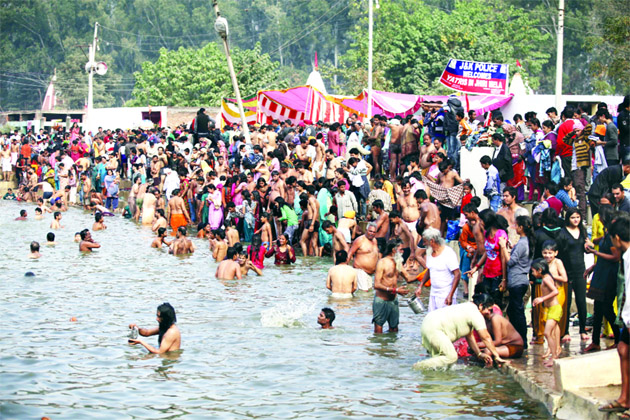 Shiv Chander Sharma
Fairs and festivals are the lifeline and an integral part of the people of India, especially, Northern parts of the country in which people from all walks of life take part with great enthusiasm.
About 22 kms from Jammu city towards the west is a well known place, Jhiri village which attracts lakhs of devotees from various parts of North India during a week- long fair held in November every year. This year the Jhiri Mela is scheduled to begin on November 8.
This fair is well known as Jhiri Mela which is held to pay obeisance to the Mesiah of the peasants-Baba Jitto- who sacrificed his life for the cause of farmers in the 15th century AD. Since then people remember this hero of the peasants by visiting the Jhiri Fair which is organised in collaboration with the J&K government.
In this connection a meeting of heads of various government departments was held under the chairmanship of District Development Commissioner, Jammu, Avny Lavasa on October 12 to finalise the arrangements for the Mela regarding sanitation, clean water supply, uninterrupted power supply, connectivity to the Mela site with black topped roads, security, adequate ration supply, fire-wood, healthcare facilities, mobile toilets, accommodation for the devotees, deployment of fire tenders etc were finalized. Besides, various sports activities including volleyball, tug-of-war, and wrestling will be organized under the Khelo India project.
The people first visit Jhiri village to pay their obeisance in the twin temples of Baba Jitto and his daughter Bua Kouri and then visit adjoining village Shama Chak where hundreds of small memorials (Samadhis) have been built by the devotees.
Shivdev Singh of the Jhiri village said that there was a Brahmin Baba Jit Mal who used to perform Puja of Vaishno Devi goddess in village Aghaar Jitto near the holy town of Katra, the base camp of Mata Vaishno shrine. It is believed that goddess Vaishno Devi took birth as his daughter later, fulfilling the desire of Baba Jit Mal (Jitto).
When a daughter was born to JitMal he decided to work as a farmer but he had no land. He went to the then ruler of Jammu, Raja Ajaib Dev (1426 AD-1474 AD) and requested him for giving land. The king gave him a barren piece of land at Jhiri on the condition that Jitmal will give 50 per cent of the produce to the king which was agreed upon.
Jit mal worked hard for days and nights and first made the soil worth tilling and then sowed the crop of wheat. It was the result of the hard labour of Baba Jit Mal that a huge quantity of wheat crop was grown in comparatively smaller field. This message spread like wild wire in the village and adjoining area and people started coming to see the crop.
The message also reached the king Ajaib Dev, said Dr D C Sharma, an eminent writer. The king himself came to the spot to see the huge quantity of the crop and instead of promised 50 per cent of the yield he demanded 75 per cent. Baba Jit Mal was not ready to yield before the King’s whims which was a routine during that time.
When Jit Mal did not agree to give the 75 per cent of the produce the king ordered his men to forcibly lift the crop at which Jit Mal resisted and urged upon the king to watch the interests of the farmers who work hard in the fields but to no avail. Finally he ended his life on the heap of the crop. His daughter also followed her father, ending her life.
It is believed that after that many miseries fell upon the kingdom and whoever had taken even a grain suffered and the same happened with King and his family. Finally the people headed by the king came to the site where Jit Mal had ended his life and prayed for his soul. The temple and some memorials were also built by the king. Since then a week-long fair is held in memory of Jit Mal well known as Baba Jitto.
The farmers recall the sacrifice of Baba Jitto by various means and prayers. No farmer forgets to take part in this fair and families of those who had taken even a grain of the produce of Baba Jitto come at this place to repent the sin of their ancestors. There is a pond at the place and it is believed that the ladies who do not conceive are blessed by a child if they take bath in it. The people have deep faith in this fair and the related traditions.