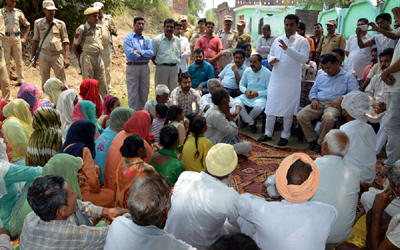 Excelsior Correspondent
KATHUA, May 28: Minister for Forests, Environment and Ecology, Rajiv Jasrotia today visited border villages of Hiranagar to take stock of the damage caused due to cross border firing.
He visited the border villages of Manyari, Londi, Chan Khatrian and Boobia and also interacted with the border dwellers. Jasrotia listened to their problems patiently and assured them all necessary help from the Government and directed civil administration and police to be vigilant for ensuring safety of the people. He also directed DC Kathua to submit a report of the affected families so that the relief under norms could be disbursed among them.
To minimize losses during cross border firing, the Minister said that Border Bhawan with all the facilities at safe locations, compensation/relief and other benefits at par with LoC and redressal of their grievances beside security of border dwellers is Government`s top most priority.
The Minister directed DC Kathua to identify a land at safer location for the construction of permanent structure so that the building with all the facilities can be used during emergency.
The Minister was accompanied by MLA Hiranagar, Kuldeep Raj, DC Kathua Rohit Khajuria, Tehsildar Hiranagar, DySP HQ, SDPO Border and other officers of civil administration.

One injured in accident