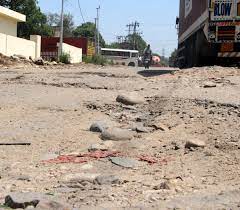 Attending to and improving road infrastructure must be one of the top priorities of the Government. Every sphere and every area of it must equitably be strengthened , more so when there is lot of pressure on these roads to this extent that any amount of repairs and improvements cannot ordinarily be undertaken during the day time especially in respect of those roads remaining busiest and being not wide enough with a leverage to let repairing go unhindered. We do not dispute that intermittently some or the other type of minor repairing works are being carried out but what about the general condition of most of the roads being such as if ploughed erratically resulting in potholes and ditches making it quite difficult for motorists to ply over and pedestrians to walk over them. What we find , however, is those roads where VIP happen to pass by are kept over attended meaning layers after layers of fine blacktopping are added over them even when not absolutely needed. These special roads are regularly painted and swept clean and tidy as if other roads do not matter at all. Who is , therefore, bothered to take care of most of the roads in the city and even outskirts clamouring for urgent repairs, is the moot question. Have any of the concerned authorities in the recent past visited the long road going left from Janipur Police post crossing known as Muthi road which is punctured by horrifying ditches , potholes , trenches and deep shelves making motoring on it a nightmarish experience. It is true of at least over a kilometre of this road and how the vehicles have to zigzag over it while getting rattled in the process, is blasting the claims of the Government about improving road infrastructure . In fact, maintaining it on elementary basis even, is in a state of shambles. The busiest point underneath the flyover near BC Road on the left of which is the fruit and vegetable mini market, is having two ditches , now for the last more than four months, passing over which cannot be avoided by any vehicle due to the narrow structure of the road and even though filling these two ditches is not anything difficult or expensive but let the traffic suffer, let there be chaos, noise and smoke pollution on account of these two ditches, it is no one’s concern. These instances are just tips of the iceberg in respect of the conditions of most of the city roads not to speak of numerous roads running through and connecting various residential colonies. Where is after all the issue of undertaking repairs and blacktopping facing a stalling position is not difficult to find out . Roads and Buildings Department is replete with the red-tape and it is learnt that renewal of cards of numerous contractors has not been done as also in respect of hot-mix plant operators it is the situation of being left in a limbo. Delays caused due to whatever reasons in the process, has a direct bearing on the prospects of Jammu roads being improved to the extent of making them reasonably motor- able in spite of the situation persisting for months in a row. Whether hot-mix plant contractors can be treated as contractors of this grade or that grade should have been settled without any fuss or unwarranted delays but on the contrary, neither any decision is taken nor any alternate arrangements are made. Who has to take a decision is indicative of how decision taking deficit is affecting the role of the R&B Department. Since the nature of the job of repairing and macadamizing of roads is almost on the regular back to back basis, opportunities for unemployed engineers and young entrepreneurs to get involved in the process could have addressed their employment concerns to some extent as also repairing of roads but even though majority of these persons have borrowed money to arrange the paraphernalia for reads construction and repairs , yet they are virtually denied issuing of the ”cards” not known for which reasons. While the policy of the Government is to create employment opportunities for the unemployed , at the same time denying renewal of cards by the R&B Department to 100 hot mix plant holders of Kashmir division and 45 in Jammu have rendered 145 persons jobless which is disturbing and a fallout of the flawed policies of the R&B Department. The other face of the problem is more grim and that is how this blacktopping is undertaken . Irrespective of the height gaining process vis-a-vis the plinth heights of the adjoining structures, houses and buildings , fresh layers are added randomly and the older dilapidated one not removed to reach the original height of the road. Some time back, which we duly highlighted, instructions were passed on to engineers and contractors engaged in roads repairs and blacktopping never ever to jeopardise the plinth heights of the houses caused due to ruthless, unprofessional and non technical ways of laying of blacktopping layers hence adding of levels of blacktopping to the older existing levels . R&B Department must cleanse and energise its working or else in the present era, outsourcing of activities is not difficult but what could its consequences mean to R&B Department hardly need any emphasis.