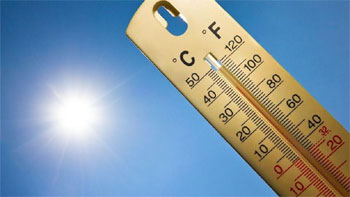 JAMMU: The day temperature in Jammu region dropped to below 40 degrees Celsius for the first time in the past 12 days while the power and water crisis continue to haunt the people, leading to protests at various places in the city, officials said today.

The day temperature in Jammu today recorded a dip for the second day and settled at 39.2 degrees Celsius against yesterday’s 40.0 degrees Celsius, a spokesman of the MeT office here said.

The city, which recorded the highest maximum temperature of 43.5 degrees Celsius this season on May 29, was facing blistering heat due to rising mercury. However, cloud cover engulfed the region yesterday afternoon but there was no major relief as rains avoided the winter capital.

The minimum temperature recorded in the city was 26.3 degrees Celsius, the spokesman said. (AGENCIES)