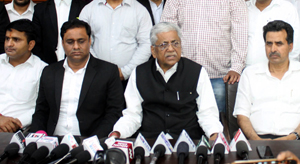 JAMMU, Apr 9: General House of J&K High Court Bar Association Jammu today endorsed the resolution of the civil society regarding Jammu bandh on April 11 in protest against illegal directions of Tribal Affairs Department and delay in transfer of Rassana murder case to CBI and deportation of illegal immigrants. Click here to watch video
A meeting of the General House of the Bar was held in the District Court Complex under the presidentship of Senior Advocate B S Slathia and after thorough deliberations the resolution of the civil society regarding Jammu Bandh on April 11 was endorsed.
Later, addressing press conference, Bar President B S Slathia appealed to the people in general and leadership of Chamber, transporters and traders in particular to make Jammu bandh a success.
“The General House has out- rightly rejected the appeal made by BJP to call off strike and unanimously in one voice stated that Rohingyas & Bangladeshis illegally settled in and around Jammu are serious security threat and they are required to be thrown out from the State”, he said, adding “it has also been decided that work in all the courts will remain suspended till April 12 when General House will take stock of the situation arising out of the bandh and chalk out future course of action”.
Meanwhile, JJSF has extended support to Jammu bandh call given by Bar Association.