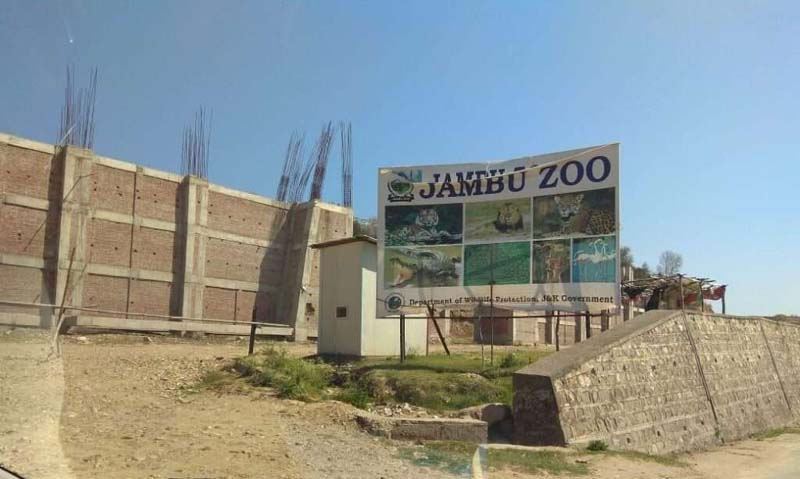 JAMMU, Feb 6: The much-hyped Jambu Zoo in Nagrota area of Jammu district is all set to miss March 2022 deadline for its completion as work on almost all the components has suffered immensely during the past several months due to poor funding by the Jammu and Kashmir Infrastructure Development Finance Corporation (JKIDFC) under the Languishing Projects Scheme. Now, new deadline of September this year has been fixed provided timely financial assistance is provided by the Corporation.
Official sources told EXCELSIOR that from time to time different deadlines were announced by the Government for the completion of Phase-I of Jambu Zoo being constructed on more than 170 hectares of land in the outskirts of Jammu city under the Languishing Projects Scheme of JKIDFC. It was also claimed that on completion the project will go a long way in attracting visitors from different parts of country and ultimately help in boosting local economy.
Earlier, it was stated officially that project will be completed in November-December 2021 but later it was claimed that Phase-I of the Zoo will be ready by March-April 2022. However, this deadline is all set to be missed keeping in view the slow pace of work on almost all the components of the project, they said while disclosing that not even one component of the project has been completed 100% mainly because of poor funding by the Jammu and Kashmir Infrastructure Development Finance Corporation.
As per the details managed by EXCELSIOR, against Rs 62.41 crore estimated cost of the project, works worth Rs 30 crores have been tendered till date and around 45% work has been completed on the project. Against Rs 16 crore worth works completed till date, only Rs 3 crore have been released by JKIDFC and bills worth Rs 2 crore are pending for clearance during the past several months.
“At present no doubt the work is going on but not at the required pace as for want of clearance of their pending works the contractors are not executing the works as desired by the Government”, sources said, adding “as per the procedure the bills of the works carried out during the past few months can be uploaded on the portal of JKIDFC only when the pending payment of Rs 2 crore is released”.
They remarked, “the objective behind taking up of Jambu Zoo Project under the Languishing Projects Scheme was to ensure its speedy and timely completion but it is a matter of serious concern that even JKIDFC has failed to ensure smooth funding for the project”, adding “now it is claimed in the official circles that project will be completed by September this year provided JKIDFC ensures smooth funding”.
“To ensure that fate of this project doesn’t hang in balance for years together the Government should intervene and ask the Jammu and Kashmir Infrastructure Development Finance Corporation to ensure free flow of funds so that much-needed attraction point comes up without further loss of time”, sources said, adding “early completion of work on Phase-I is imperative as after that the Wildlife Department will have to focus on the Phase-II under which several works have already been planned”.
It is pertinent to mention here that Jambu Zoo will be different one as mostly Zoos in India are in plain areas like Delhi, Mysore, Kolkata, Chennai, Chandigarh, Bengaluru and Hyderabad but the upcoming one will be a hilly area Zoo like the one in Darjeeling. After completion of phase two, Jambu Zoo will be one of the biggest Zoos in North India.
“Cycle and battery operated vehicle facility for the visitors to move inside the Zoo premises and trekking route of five kilometers will be among some facilities to be available in the Zoo while Zipline swing has also been approved by Central Zoo Authority of India (CZAI) for Jambu Zoo as an adventurous item,” sources maintained.