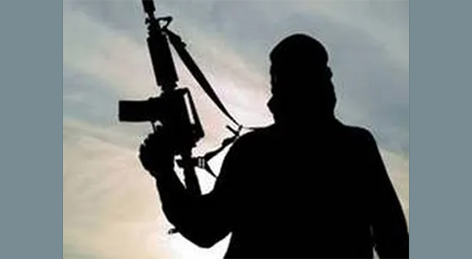 Govt, security establishments were targets
*Infiltration from fence or tunnel part of investigation

Sanjeev Pargal
JAMMU, Nov 20: The Jaish-e-Mohammed (JeM) at the behest of Pakistan Army had plotted 26/11 like terror attacks in the Kashmir Valley as they planned to target Government and security establishments but their designs were foiled by police, SOG and CRPF by eliminating the militants and seizing their entire consignment of weaponry at Nagrota yesterday.
Reliable sources told the Excelsior that the Jaish outfit on the directions of Pakistan Government and Army planned to cause sensational terror attacks in Kashmir on 12th anniversary of November 26, 2008 Mumbai carnage by targeting the Government and security establishments in the Valley.
For the purpose, they said, the militants, who were killed in pre-dawn encounter by the security personnel, were smuggling 11 AK rifles with large quantity of explosive devices with them. This, they added, is for the first time that 11 assault rifles were recovered from the possession of four militants.
“Generally, a militant carries one rifle with him. This time, there were almost three rifles for one militant. There were indications that another group had to join the slain ultras in the planned terror plot for whom the weapons were smuggled from Pakistan through the International Border and were being taken to the Valley,” sources said.
They added that more militants had to be involved in the attack which was evident from number of assault rifles being smuggled from across the border by four slain militants, who were killed in three-hour long encounter at Nagrota yesterday. All of them were Pakistanis affiliated with the JeM outfit.
The Government and security establishments were reported to be the targets of Jaish militants.
Describing killing of all four militants in swift operation by Jammu Police, SOG Jammu and CRPF as “big success”, sources said: “Had the militants manage to reach Kashmir along with such a big consignment of weapons, it would have been major catastrophe”.
Sources said they were trying to ascertain whether the militants breached fencing on the International Border or they had access to a tunnel for infiltration into the Indian territory from Pakistan.
“Unless the tunnel is quite big, it is not possible for the militants to smuggle such large quantity of weapons including 11 assault rifles with them while crawling in the tunnel. In case of infiltration after cutting the fencing, the militants would have been helped by their guides right up to the truck in transporting big consignment of weaponry,” sources said, adding the guides sometimes manage to return after leaving the militants at some reasonable distance.
However, a cutter has been recovered from the possession of slain militants which indicated that they might have cut the fencing.
While the NIA teams had yesterday visited Nagrota, the site of encounter, the Union Ministry of Home Affairs has not issued any order so far for handing over the terror attack to the investigating agency.
A decision is expected in next couple of days, sources said.