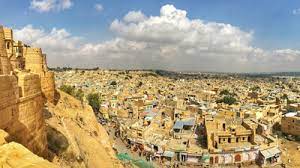 JAISALMER, Sept 4: Pieces of art made from scrap items will welcome tourists in Rajasthan’s Jaisalmer where 20 artisans called from Delhi are busy giving shape to several statues and other artwork.
The city, situated on the India-Pakistan border in west Rajasthan, is famous for its sand dunes, havelis, Sonar Fort, Gadisar Lake, desert national park and several other places.
The initiative has been taken by the Jaisalmer Municipal Corporation, which will clear the scrap items kept in the store of its building.
“Two statues of camel, one of a man and the other of a woman with folded hands have already been installed at Gadisar Lake,” says Municipal Commissioner Shashikant Sharma.
A statue of a horse made from tyres is ready and the work on several others, including that of some birds, is going on, the officer says.
Sharma says around 20 locations, which include tourist spots and public parks, have been identified for the installation of statues and other artwork.
“There is so much scrap in the store, that is now being utilised. Artisans are making beautiful statues out of this junk,” Sharma says.
“Apart from traditional sites, these new attractions will surely give a refreshing look to the city. Jaisalmer is known for the Sonar Fort, sand dunes and havelis, and now people will have something more to click photos,” another officer says.
Sushil Doshi, whose Delhi-based firm MS Group is executing the project, says around 20 artisans and labourers have designed and prepared statues of camel and human figures, which were painted in golden colour.
“The work on a horse statue made of tyres is going on and it will be over soon. Such artwork attracts the public and enhance the beauty of the place where installed,” he says.
He says mostly junk material is being used. “Our artists make the design and then the items are scrutinised. Most material used in making the artwork is junk material,” he says, adding that the artwork is painted to enhance the life and appearance. (PTI)