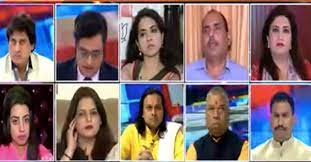 Throughout the day, we watch mushroomed TV channels in India conducting spate of debates, one after the other, on ”current situation” and topics ostensibly not generally for any purpose that could lead to generation of positivity or reconciliation of ideas or less clashes of thoughts but such conditions get created where even some panellists get motivated or provoked to put foot into their mouths trading charges and counter charges. If religious feelings, even unwittingly or innocently, even by a slip of tongue, are caused to be hurt during the course of such debates, it goes against the tenets of decencies of debates as also against the time tested thousands of years traditions of Indian civilisation. No one, therefore, has any authority to hurt religious feelings of any one belonging to any faith in the country. In this connection, in a similar unfortunate incidence of ”foot into the mouth” indulged in two panellists of the BJP , which has resulted into sprouting of resentment and controversies, action has been taken against both of them by the Party by removing from the basic membership and even expelling them. The message, therefore, must go loud and clear that nobody can get the license to cross the lines of decencies and they could in the event not go scot free, more so when it is the matter of ”official” spokespersons of a political party. Insulting or demeaning any sect or faith cannot be justified.