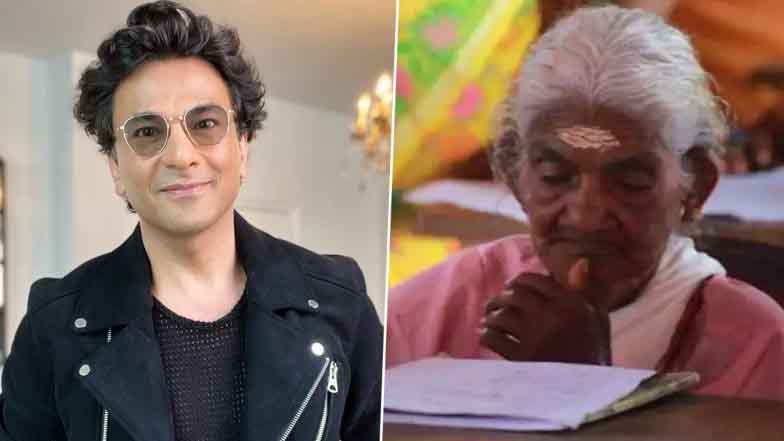 NEW YORK, Dec 8: The awe-inspiring story of a woman in India who enrolls in first grade at the ripe old age of 96 is now paving the way for an ambitious movement to bring five million girls back to school over a period of three years, rehabilitate classrooms and improve nutrition.
‘Barefoot Empress’, a 15-minute short film directed by Michelin Star Chef Vikas Khanna and produced by Oscar-nominated Doug Roland chronicles the remarkable journey of Karthyayani Amma of Kerala, who as a young girl did not have access to education, displays tremendous courage and resilience when she joins a first grade class at the age of 96.
The nonagenarian scores a highly commendable 98 out of 100.
Khanna highlights that ‘Barefoot Empress’ is a “love letter to never giving up on your dreams” while also shining a light on the lack of educational opportunity for girls in certain parts of India.
With Amma as the inspiration, Khanna, whose directorial debut the Neena Gupta-starrer ‘The Last Color’ won critical acclaim globally, is now focussed on setting in motion a movement that involves rehabilitating classrooms for better educational environment, improving nutrition by providing healthy meals, providing basic educational supplies in partnership with non-profit organisation Leap to Shine and training girls in culinary skills to be financially independent. Inspired by Barefoot Empress, Leap to Shine has named Amma, who was honoured with the Indian government’s prestigious Nari Shakti Puraskar in 2020, a global ambassador and pledged to educate five million girls in India.
“Barefoot Empress is an inspirational story of courage, perseverance of Karthyayani Amma – story of a girl who dreamt of going school, and finally walked to school after 96 years However, there will be eleven million girls who might never get that chance!” Khanna said.
For Khanna and his team, the “mission around Barefoot Empress is focussed around starting a movement to bring girls back to school while impacting education and livelihood skills. Our goal is to deliver this for five million girls.”
The movement to bring five million girls back to school in three years will be enabled by a four-pronged approach. This will include rehabilitating and renovating classrooms and creating an enabling learning environment.
While 18 classrooms have been renovated over the last few days, the plan is to rehabilitate 25 classrooms in phase one.
The movement also aims to focus on nutrition, the lack of which leads to school drop outs. Khanna’s team estimates that it takes 10 dollars to support and provide meals to a girl child for one year and they plan to serve 100,000 meals.
Under the initiative, school bags, pencils, books and copies, tablets are being distributed to girls in marginalised schools to bridge the educational and digital divide. Tablets are also being provided to 300 girls.
The fourth aspect of the movement is to pilot a culinary course for girls from underserved communities in Dharavi to make them self-reliant and financially independent through livelihood enhancement programs.
The team is planning to run a pilot with 25 girls to begin with and then scale it.
The COVID-19 pandemic continues to have a significant negative impact on the education of girls not only in India but around the world, setting nations back after decades of progress of ensuring gender equality in education.
UNESCO had estimated that following the COVID-19 pandemic and its unprecedented disruption to education, 11 million girls may not return to school.
Girls aged 12-17 are at particular risk of dropping out of school in low and lower-income countries, whereas boys are more at risk in upper-middle and high-income countries, the UN agency had said.
UNESCO had said that before COVID-19, there was already a long way to reach gender equality in and through education.
In 10 countries around the world (Benin, Cameroon, Guinea, Haiti, Mali, Nigeria, Pakistan, Papua New Guinea, Senegal and Timor-Leste), the “poorest girls spend less than 2 years in school on average. In Guinea, Mali and Pakistan over 80 per cent of poor girls have spent only two years or less in school,” it said last year.
According to the Gender Report of the Global Education Monitoring Report (GEM), in the past 25 years, 180 million more girls have enrolled in primary and secondary education since the Beijing Declaration and Platform for Action, a landmark commitment to advance the rights of girls and women made in 1995 by 189 countries.
“These gains are now threatened by the COVID-19 pandemic,” the UN agency said.
Barefoot Empress has been garnering critical acclaim globally and won the Biogen Award for Best Short Film at Tokyo’s prestigious Short Shorts Film Festival this year.
It was showcased at Asia Society, with award-winning American journalist Katie Couric moderating a post-screening Q&A session with Khanna.
Leading artists and executives from around the world have showered praise on the short film.
Renowned actor Shabana Azmi said the movie “stays with you long after you’ve watched it” and Amma “is the epitome of strength and determination.”
Prominent actor Anupam Kher said “you are never too old to pursue your dreams as long as you have the courage and determination.”
Former PepsiCo CEO Indra Nooyi said the movie is a “necessary reminder to girls and women everywhere of the power of hope. I was moved to tears.”
Under his ‘Feed India’ campaign, Khanna had distributed millions of meals and essential supplies across India during the first wave of the COVID-19 pandemic and worked round-the-clock to mobilise and transport thousands of oxygen concentrators, fire-resistant PPE kits and other essential supplies as the pandemic ravaged across his homeland.
Khanna hopes that the one step that Amma took at the age of 96 towards a school will herald in hope and possibilities for millions of young girls in India and beyond to fulfill a similar dream that Amma harbored for decades – that of a good education. (PTI)