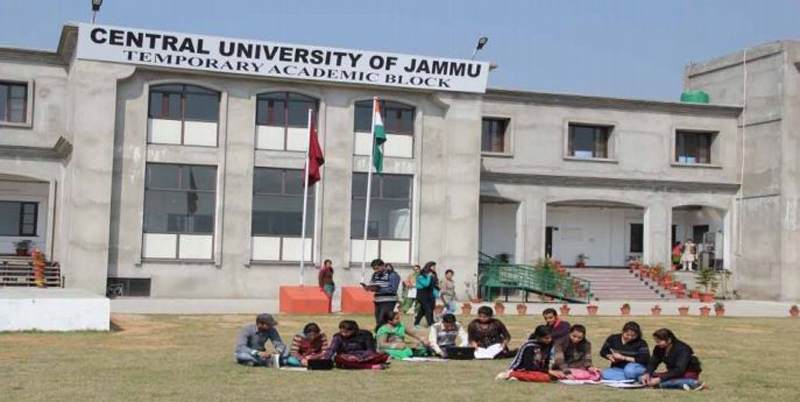 Nishikant Khajuria
JAMMU, July 20: Even after getting exposed and rebuffed by the Visitorial Committee, which did not find any deviation in norms in the selections during the period of his predecessor, the incumbent Vice-Chancellor of Central University Jammu kept victimizing the selected candidates notwithstanding a clean chit to their selection by the UGC inquiry panel.
Besides giving a clean chit to the selections made in 2013-14, the much talked about Visitorial Committee has exposed the present administration of CUJ for its vindictive attitude towards the selected candidates and those at the helm of affairs in the past.
“There seems to be deliberate attempt to present facts in distorted manner so as to create an impression before the Visitorial Committee that massive impropriety has taken place in the selections during the period of former Vice-Chancellor S S Billoria, while the facts speak otherwise,” says the Visitorial Committee report, a copy of which is in the possession of the Excelsior.
The Visitorial Inquiry to look into the appointments made by CUJ during 2013-14 and other issues, was initiated by the University Grants Commission (UGC) last year on the direction of Ministry of Human Resources Development (MHRD) following some complaints of alleged violation of norms in the selection of Dr Devanand as Professor and others, including some Assistant Professors and Assistant Registrar.
The Visitorial Committee, comprising Prof Jaspal Singh Sandhu ( Vice-Chancellor of Guru Nanak Dev University, Amritsar), Prof Ram Singh of Delhi University and Dr Jitendra K Tripathi, Joint Secretary UGC, went through the relevant records made available by the CUJ and relevant papers available with UGC. Besides, all the appointees under question and then OSD Central University Jammu, Dr P S Pathania appeared before the committee, which also interacted with former VC S K Billoria and other stakeholders for making an overall assessment of the selection process under review.
After holding series of meetings and going through the records, the Visitorial Committee concluded that there was no deviation of the norms in the appointment of Prof Devanand, Deepti Malhotra, Dr Pavinder Singh, Vikas Gupta and others, except in one case of Bhavna Arora, whose PhD degree by Jammu University was under question because of her Engineering degree under distance Education mode.
“As per the observations given by the committee, it is quite evident that except in the case of Bhavna Arora, the remaining selections seem to have been done following all procedures and norms as per the requirement of the UGC,” read the voluminous report in its final conclusion.
“As far as Bhavna Arora is concerned, her qualification for joining PhD in Jammu University is under scrutiny by JU, the report of which is yet to be submitted. He case will be adjudicated following the submission of the report by the University of Jammu,” the Visitorial inquiry report further adds thus not ruling out a clean chit to her selection also.
Even as the committee report was sent to the Central University of Jammu by UGC on May 2, 2019 vide speed post consignment number ED 234551087IN, booked on May 3, 2019, and the same was received here on May 9, 2019, the vindictive CUJ administration did not reveal the same to keep victimizing the selected candidates.
For the purpose, the CUJ even went to extent of misleading J&K High Court where a Special Writ Petition has been filed by one of the aggrieved candidates, who has been denied permission by the University to pursue her PhD and MHRD Fellowship on the plea that her appointment was under question.
Despite a clean chit by the Visitorial Committee report, received on May 8, the CUJ submitted before the High Court on May 20 that the matter of appointment is still pending under investigation before the MHRD, thus misleading the court.
In another instance of displaying its vindictive attitude and keep victimizing the selected candidates, Dr Pavinder Singh, Assistant Professor in the Department of Mathematics, was suspended as a member of Academic Council, CUJ with immediate effect on May 14, 2019 on the ground that he was not behaving properly “probable because of mental stress due to ongoing Visitorial inquiry against his appointment in the university…..”
Before both the actions, the CUJ had already received the Visitorial report but the same was not revealed to keep victimizing the selectees under a vindictive approach towards them.