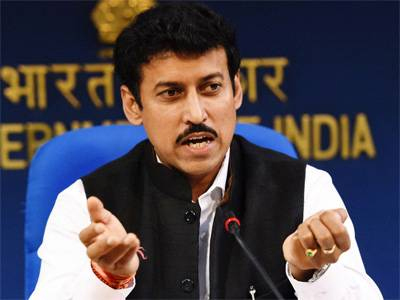 NEW DELHI, Feb 7:
Information and Broadcasting Minister Rajyavardhan Rathore said India’s radio signals have got more reach in Pakistan than signals reaching here from the neighbouring country, Information and Broadcasting Minister Rajvardhan Rathore said today.
”Under an International treaty, signals cannot be stopped, so Pakistani signals are reaching here, but our signals are reaching the neighbouring country more than their reaching here,” Mr Rathore said responding to supplementaries during Question Hour.
To another question, he said as many as 221 Programme Executives in All India Radio have been given promotions in 2018 although the execution is pending, he said.
”The Departmental Promotion Committee is not sitting on any promotions. A total 221 promotions have been made in 2018,” he said.
No promotions were made since 1990 because the matter was stuck in courts, but now the promotions were done during the NDA regime , although their execution was pending, Col Rathore said. Through Direct To Home (DTH), the whole country was covered, so AIR channels can be accessed through internet, the Minister said, adding that people can hear programmes of their choice on their mobile phones.
Mr Rathore also said radio signals covered 99.2 per cent of the country’s population.
To another supplementary, Col Rathore emphasised that mandate of Prasar Bharti, All India Radio and Doordarshan was to provide quality programmes with emphasis on promoting and conserving country’s culture and traditions rather than generating revenue, as done by private channels.
As regards Private FM Radio channels, 137 new private FM radio channels have been operationised in the country during past four years and current year, he said. He also said,”We are closing down Analogue transmitters, as we are digitising the system which will provide better clarity as well as give 10 channels,” the Minister said, adding that most people have got set top boxes and DTH can be used for receiving better transmissions. (PTI)