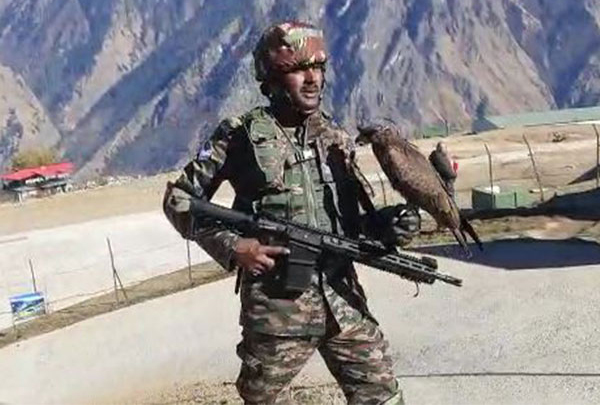 Auli (Uttarakhand), Nov 29: In a first, the Indian Army has trained kites to prey on enemy drones and they were shown in action during the ongoing joint training exercise Yuddh Abhyas of India and US in Uttarakhand’s Auli.
A kite named “Arjun” trained to prey on enemy drones was shown in action during the ongoing joint training exercise.
During the exercise, the Indian Army created a situation, in which the Indian Army used a kite and a dog to identify the location of enemy drones and destroy them. In this, the dog alerts the Indian Army after hearing the sound of the drone. Whereas the kite works to identify the location of the enemy’s drone and circumcise it in the air.
Indian Army troops are using trained Kites to prey on enemy drones in a first-of-its-kind usage of these birds. Indian Army is using trained Kites along with dogs for military operations, Army officials said.
Such a capability can help the security forces to tackle the menace of drones coming from across the border to Indian areas in Punjab and Jammu and Kashmir.
Several cases have been reported where drones coming from Pakistan side have dropped consignments of drugs, guns and money in Jammu and Kashmir and Punjab.
Recently on November 24, Jammu and Kashmir Police recovered a consignment of weapons and Indian currency that were dropped by a Pakistani drone in the Samba district of Jammu.
The Indian Army troops carried out slithering operations from the Mi-17 helicopter during the exercise Yuddh Abhyas.
During the joint exercise, the Indian Army also displayed the unarmed combat skills of soldiers.
The 18th edition of the Indo-US joint training exercise “Yudh Abhyas 22” commenced in Uttarakhand’s Auli on Saturday.
Exercise Yudh Abhyas is conducted annually between India and US with the aim of exchanging best practices, Tactics, Techniques and Procedures between the Armies of the two nations.
The previous edition of the exercise was conducted at Joint Base Elmendorf Richardson, Alaska (US) in October 2021.
US Army soldiers of the 2nd Brigade of the 11th Airborne Division and Indian Army soldiers from the ASSAM Regiment are participating in the exercise. The training schedule focuses on the employment of an integrated battle group under Chapter VII of the UN Mandate.
The scope of the Field Training Exercise includes the validation of integrated battle groups, force multipliers, establishment and functioning of surveillance grids, validation of operational logistics, mountain warfare skills, casualty evacuation and combat medical aid in adverse terrain and climatic conditions.
According to the Army, the joint exercise focuses on deploying an infantry battalion group in peacekeeping and disaster relief operations under the mandate of the US.
The Yudh Abhyas is a 15-day-long exercise that will focus on high altitude and extremely cold climate warfare. (Agencies)