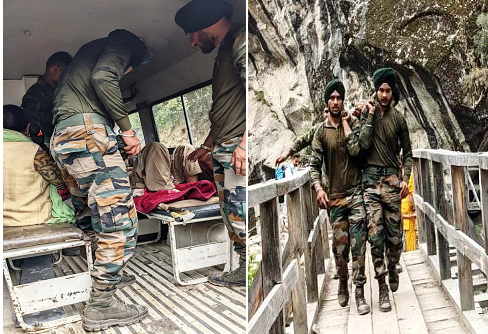 KISHTWAR, JULY 5: The troops of RR (MARATHA LI) today saved the life of two elderly women when they were on a pilgrimage to Chitto Mata Yatra in Paddar region of Kishtwar District.
The troops of 17 Rashtriya Rifles (MARATHA LI) from Kijai COB were providing prophylactic security to Chitto Mata Yatris in Paddar region of Kishtwar, the soldiers who were part of patrol were alerted by cries for help from a distant. The troops of 17 Rashtriya Rifles (MARATHA LI) immediately rushed in the direction of the noise to investigate without wasting time.
On reaching the spot, the patrol found out that two women namely Neelam Kumari age 62 years resident of Digyanan, Jammu and Vaishno Devi age 60 years resident of Fylmandal, Jammu were unwell.
Neelam Kumari was suffering from low BP and was unable to breath and Vaishno Devi had suffered serious leg injury due to fall and was unable to walk. The patrolling party of 17 Rashtriya Rifles (MARATHA LI) immediately provided First Aid and evacuated them to PHC Atholi by traversing through difficult terrain and crossing Chandrabhaga River.
Timely First Aid to the ladies and braving and overcoming the challenges posed by terrain and weather, the lives were saved. The brave and selfless act by the troops of the Indian Army was praised by the families of both the ladies and all Yatris.