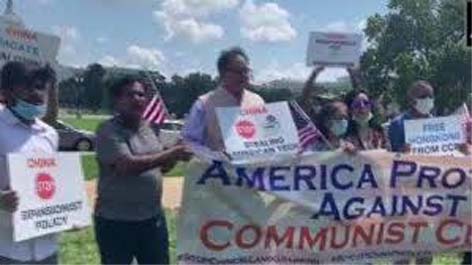 WASHINGTON, Aug 10: A group of Indian-Americans from in and around the national capital held a protest here against China’s aggression towards India and the human right violations of Uyghur minority groups in the country’s restive Muslim-majority Xinjiang region.
Maintaining social distancing and wearing masks, the peaceful protestors on Sunday gathered at the historic national mall facing the US Capitol and displayed anti-China posters, banners and raised slogans against the Communist Party of China and its leaders.
“This summer while the world was fighting coronavirus, China was trying to encroach upon other’s land. It’s not only in Ladakh in India but also against it’s other neighbours as well. It’s time that the world unites against this Chinese aggression,” said Adapa Prasad from Overseas Friends of BJP USA.
Indian and Chinese troops have been locked in a bitter standoff in several areas along the Line of Actual Control (LAC) in eastern Ladakh since May 5. The situation deteriorated after the June 15 Galwan Valley clashes in which 20 Indian Army personnel were killed and an unconfirmed number of Chinese soldiers died.
“China’s Communist party has infringed on the religious rights of the Uyghur community and violated human rights of people of Hong Kong,” Puneet Ahluwalia, who is an Indian-American Republican and founder of the Proud American Political Action Committee, said.
Ahluwalia, who is exploring to run for the post of Lieutenant Governor of Virginia, said US President Donald Trump’s hard measures against China was in the right direction.
“China has to play international rules,” he said.
“We have seen what they have done in Africa. We have seen that they are doing in Iran…. Most importantly, they recently backstabbed India,” Ahluwalia said, alleging that China is spying on Americans through various social media applications and by stealing data and information.
Sunil Singh, an eminent Indian-American from the Greater Washington DC area, praised Prime Minister Narendra Modi for banning Chinese applications in India.
Noting that people of India have stopped buying China made goods, he said there was also a need for the Americans to make a similar move.
This was the second major anti-China protest by Indian-Americans here in Washington DC. (PTI)