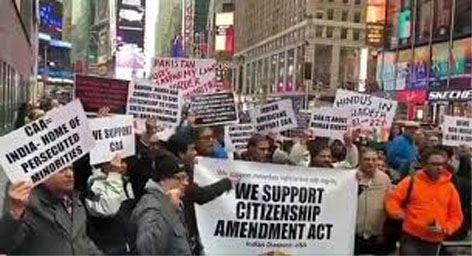 WASHINGTON, Jan 7: A group of Indian-Americans held a rally in support of the Citizenship Amendment Act (CAA) in Boston, community members said.
Braving sub-zero temperature, members of the Indian-American community from in and around Boston area gathered at the historic Harvard Square on Sunday to participate in the rally, a press release issued by the organisers stated on Monday.
Displaying posters and banners reading “We support Citizenship Amendment Act”, “Indian-Americans Support CAA” and “CAA provides citizenship to persecuted minorities”, the participants thanked Prime Minister Narendra Modi and Parliament for the enactment of the Act.
According to the CAA, members of Hindu, Sikh, Buddhist, Jain, Parsi and Christian communities who have come from Pakistan, Bangladesh and Afghanistan till December 31, 2014 following religious persecution there will get Indian citizenship.
“The rally was attended by people from different walks of life and by all age groups. The rally was aimed to show support to the Act and also educate the people about the Act, counter misinformation and myths about the Act,” the organisers said.
Robert Lancia, member of Rhode Island House of Representatives, also attended the rally. (PTI)