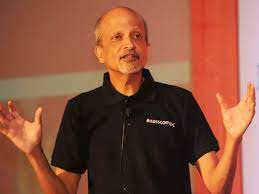 WASHINGTON, Feb 27: An Indian Institute of Technology campus in the UAE, the funding of an Aadhaar-like citizenry identification in Sri Lanka or the launch of UPI payment system in Nepal are not unconnected events, but are tell-tale signs that India in the next decade will rise as a major global player, a top Indian-American entrepreneur and venture capitalist from Silicon Valley has said.
M R Rangaswami, who was one of the founding members of software consulting and investment company, Sandhill Group, also said the 32-million strong Indian diaspora has a big role to play for India becoming a global player.
In a recent interview to PTI, Rangaswami said: “They (certain recent developments) seem on the surface very disconnected, like there’s going to be an IIT (Indian Institutes of Technology) in Abu Dhabi. Nepal is going to implement UPI (Unified Payments Interface) gateway and Aadhaar is being funded for Sri Lanka. But if you put it all together, you start seeing what possibilities are,” he said.
“Each one of these: for example if you can do an IIT in Abu Dhabi, why can’t they do an IIT in South Africa or some other countries? Can Indian education be a brand to go global? Then you look at UPI gateways that cost little to connect banks, mobile phones, etc. Can that be taken to 100 countries that are developing? Same thing with Aadhaar, as every country needs some national identity system. Can that go (global?) because that’s the cheapest form of national identity?” he explained.
“It has been developed at a scale, it has got good privacy, and security as well. You can easily see each one of these taking shape. Sometimes when history is being made, you don’t know what is going on. It’s like you’re, you’re in history. When you’re in history, you don’t know you can’t see it,” said the philanthropist and community builder.
Both Aadhaar and UPI are going to be global, he asserted, pointing out these initiatives are proven with billions of transactions each day, are low-cost, and dependant on cloud data.
“It can easily be taken to any country in the world,” he said. “So I think all these initiatives are becoming global,” he said.
“I think it’s probably the beginning of India becoming a global pillar. Obviously, you start in your neighbourhood. But I can easily see it going to Africa, Southeast Asia, Latin America, lots of different places,” he said.
Rangaswami, a major diaspora leader in the US, said Indian businesses are booming in foreign lands.
“When you look at the Adanis (Adani Group). They are buying ports in multiple countries, infrastructure projects. We’re buying airports and building them in other countries. You start seeing that happening. Then at the same time you see, (corporate leaders) like Mukesh Ambani with Reliance Jio; providing lowest cost (internet) data,” Rangaswami said.
“It’s not just the government. For India to emerge as a global power, you need concerted initiative from both the government and the industry,” he observed.
Rangaswami said India is building massive infrastructure projects inside the country, which he believes can be taken to other countries.
“Whether it’s 5G, whether it is data port, computers, smartphones, all that kind of stuff, or whether it’s ports, airports, roads. We are building more roads in India than any other country. We can take that and grow. So, you can see how the industry can play a huge role and start to do that right,” he said.
Another major factor contributing to India’s emergence, according to Rangaswami, is the diaspora. “Look at 32 million of us living outside of India right, the remittances to India alone, which really helped the country, is close to USD100 billion a year. That has always been happening and will continue to increase,” he said.
Further, the diaspora populations influence can be branched out into three categories, he said using the example of Indiaspora, a non-profit body founded by himself.
The first section is 60 business leaders of Indian-origin running Fortune 500 corporations. “They are an asset.”
“Then we’ve also identified political leaders. There are over 200 political leaders throughout the world of Indian origin: prime ministers, presidents, vice presidents, ministers. They could be a resource. They recently published a list of 100 philanthropists. When all this is taken together, the Indian government initiatives, Indian private sector, industry initiatives and that of the diaspora, you can now see how over the next decade, India could really grow in stature as a global power; but a non-threatening power,” he said.
“You can easily see that these three different parts of our system, working together, can really make India a global power in the next decade. That’s what I’m saying, we’re in history, so we cannot see all this stuff, but I’m just starting to play out what it could look like, what history could look like,” Rangaswami said. (PTI)