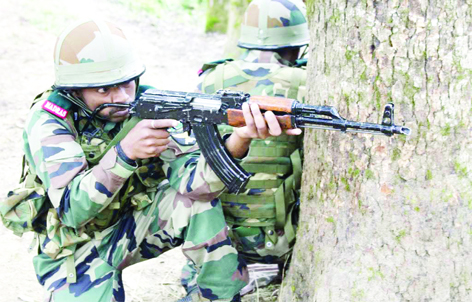 Harsha Kakar
The Indo-China standoff in Ladakh has been ongoing for close to two months. It will prolong as China is in no hurry to withdraw. China cannot intrude, have a few rounds of military and Working Mechanism for Consultation and Coordination on India-China Border Affairs (WMCC)meetings and pull back. Doing so would be tantamount to having no logical reason for its actions and be indicative of withdrawing under Indian pressure.
The expenditure which China incurred to project pressure on India would also not be justified. It is simultaneously aware of the problems of maintaining its forces deployed in the region through the winters. The administrative tail as also infrastructure essential for their camping would be immense. The forces currently deployed are below levels for war, while it continues to slowly build additional forces in depth areas.It is monitoring matching Indian deployment, which would entail much larger forces for expanding the conflict.
Recent military level talks ended with both countries agreeing to disengage in Galwan and Hot Springs, with no mention yet on Pangong Tso, which remains a sticking point. Here too, the disengagement would be slow and time consuming, as trust deficit exists. It reinforces Chinese intentions of not pulling back early.
To enhance pressure on India it has directed Pakistan to deploy forces in Gilgit Baltistan and enhance terrorist strikes within Kashmir. As per satellite imagery, Pakistan has deployed upto two divisions in the region. China is hoping to create an environment of a two-front war on India, especially as it concerns Ladakh, where the current standoff continues. It is attempting to push India to commence political dialogue to end the crisis. India is currently unwilling to bend, waiting for China to blink first. Thus, China may extend its deployment opposite other regions, including Sikkim and Arunachal Pradesh,to enhance pressure. The Indian army has already stated that it is prepared for the long haul.
To further push China, India is expanding the nature of conflict. Its first action has been to block Chinese investments and its mobile Apps within the country. Simultaneously all contracts, including telecommunications and infrastructure development, where Chinese firms were permitted to compete are being reviewed and Chinese tenders rejected. It has even acted to stop imports for major sectors from China. India has raised the ongoing military confrontation to the next level, economic.
Rising nationalism has led to a boycott of Chinese goods. While blocking Chinese Apps and pushing Chinese business from open competition in Indian projects may not have a major financial impact on China, it appears to convey the message that India stands firm in its demand of restoration of status quo ante and it will not withdraw, militarily prepared for any escalation the Chinese have in mind.
China’s attempts to enhance pressure on the government through its select Indian mouthpieces in politics as also media personalities,which include a sprinkling of anti-BJP veterans,has failed, as the government stands firm. It ignores internal pressure while acting maturely and in a planned manner.
The message has been received by China and it is evidently unhappy. Responses on closing of Chinese Apps flowed from the Chinese embassy in Delhi as also its foreign office spokesperson in Beijing. As per the Global Times the loss, only on account of banning Tik Tok, would be to the tune of USD 6 Billion to its parent company, ByteDance. The plan of ByteDance to push forth an IPO of USD 100 Billion is now history.
An editorial published on 30th June in the Global Times stated, ‘It is undeniable that the app ban will hurt commercial interests of relevant Chinese companies, but, when looking at the bigger picture, it is clear that India is in no position to cause harm to China’s juggernaut economy.’ It added, ‘India’s attempt to extend the China boycott to the internet services sector is sending a very negative signal as the country’s boycott-China provocations will further worsen bilateral relations to trigger an economic conflict.’ The message has been received.
While China has been stating that its investments would enable Indian economic growth, the reality is vastly different. The total Chinese investment in India is USD 6.2 Billion, in approximately 90 projects in the IT and electronics sector.
China even attempted to twist the ongoing crisis by linking the current Indian government’s actions to Hindutva, an act it assumed would win supporters from amongst the anti-BJP lobby in India. In a Global Times op-ed of 01 Jul, the author, Yuan Jirong, a former correspondent in Delhi, writes, ‘Given the recent boycott of Chinese products and companies in India, we can see that anti-China sentiment among Indians stems from something more than just the border clashes between the two countries. It reflects the rise of Hindu nationalism and the prominence of India’s ambition and pursuit to become a major power.’ Indians are standing together, cutting across religious and party lines and this is hurting China.
In addition to economic actions, the Indian representative at Geneva raised Hong Kong at the UN Human Rights Council. This was the first time that India has ever commented on Hong Kong. The statement read, ‘We have heard several statements expressing concern on these developments. We hope the relevant parties will take into account these views and address them properly, seriously and objectively.’ India has expressed this right by claiming that Hong Kong has a large Indian community. This comment was an indicator that India could now raise the conflict to the diplomatic level.
The bonhomie which existed post Wuhan and Chennai are now ancient. There is no likelihood of them recommencing anytime soon. The Indian government has multiple cards which it could employ to hit back against China. It is opening them slowly, depending on Chinese actions to revert to status quo ante. Any acclaimed strategist would hold all cards close to his chest, displaying them slowly as the need arises. That is the Indian strategy and is currently most logical.
(The author is Major General (Retd)
feedbackexcelsior@gmail.com