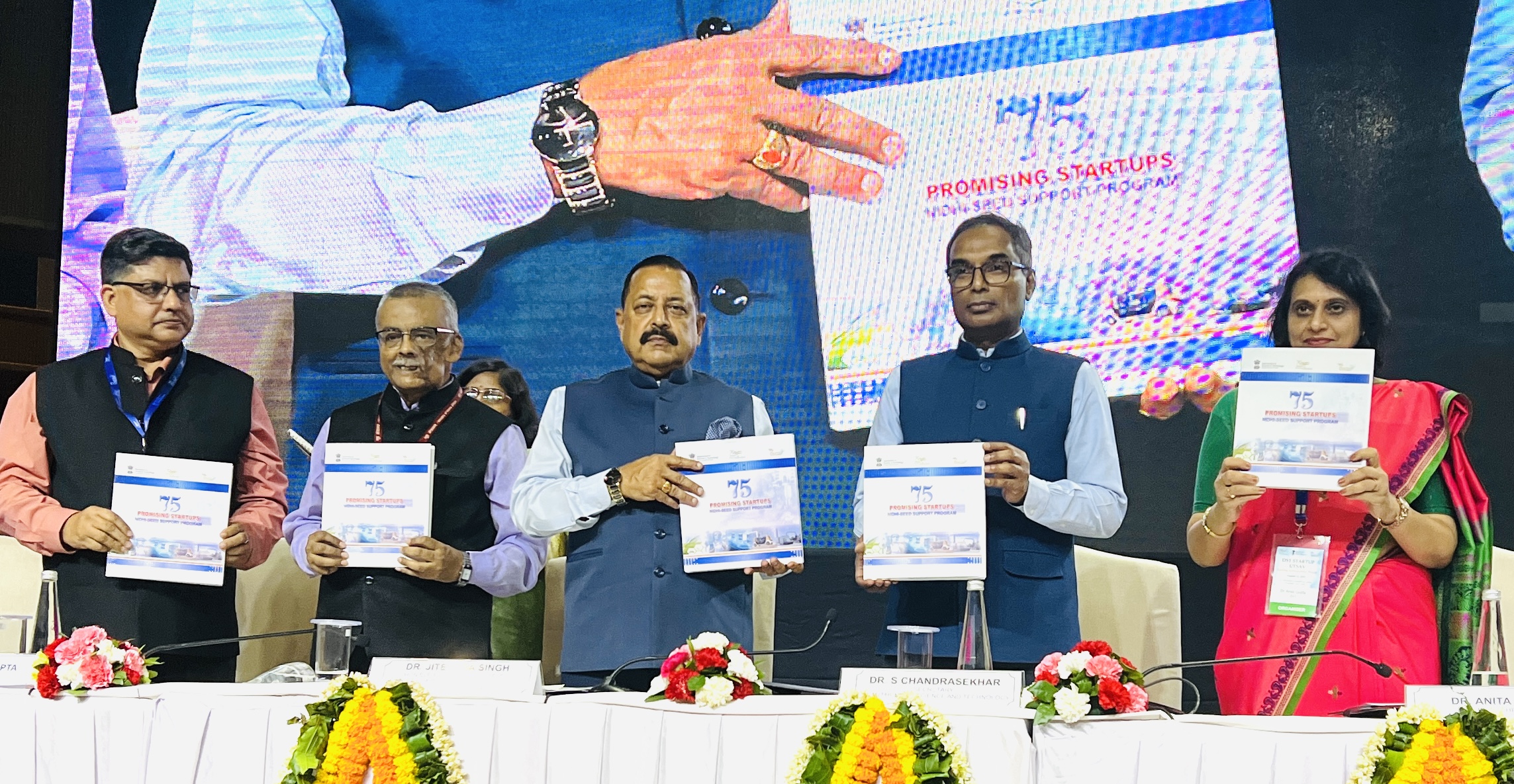 NEW DELHI, August 12 : India ranks globally 3rd in StartUp ecosystem and also in terms of number of Unicorns. As per the latest data, there are currently 105 unicorns, out of which 44 were born in 2021 and 19 in 2022.
This was stated today by Union Minister of State (Independent Charge) Science & Technology; Minister of State (Independent Charge) Earth Sciences; MoS PMO, Personnel, Public Grievances, Pensions, Atomic Energy and Space, Dr Jitendra Singh while delivering keynote address at “StartUp Utsav” organised by the Department of Science & Technology (DST) at Ambedkar International Centre here.
The Minister said, the decade 2021-30 is expected to bring transformational changes for Indian Science, Technology and Innovation (STI).
Dr Jitendra Singh said, under Prime Minister Narendra Modi, India has increased the Gross Expenditure on R&D (GERD) more than three times in the last few years. He said, as per the latest data, India has over 5 lakh R&D personnel, the number that has shown a 40-50% increase in the last 8 years.
In the last 8 years, Dr Jitendra Singh said, women’s participation in extramural R&D has also doubled and now India occupies 3rd rank in terms of number of PhDs awarded in Science and Engineering (S&E) after the USA and China. With the shifting global powers and technology becoming the epicentre of international engagements and rulemaking, India under Modi is living up to global benchmarks.
Referring to Prime Minister Modi’s launch of StartUp India from the ramparts of Red Fort in 2015, Dr Jitendra Singh said, India in its 75th year of Independence is now home to as many as 75,000 StartUps. He said, India ranks 3rd globally in terms of StartUp ecosystem and also in terms of number of Unicorns. He said, as per the latest data, there are 105 unicorns, out of which 44 were born in 2021 and 19 in 2022.
Dr Jitendra Singh said, Modi’s special focus on Science, Technology and Innovation has fired the imagination of the youth in the country to innovate and solve problems with new ideas. He also pointed out that India’s startups today are not limited to only metros or big cities and added that 49 per cent of the start-ups are from tier-2 and tier-3 cities. The Minister said, we have startups emerging in the fields like IT, agriculture, aviation, education, energy, health and space sectors.
Dr Jitendra Singh said, India ranks third among the most attractive investment destinations for technology transactions in the world as it has a strong focus on science and technology. He said, India is among the topmost countries in the world in the field of scientific research, positioned as one of the top five nations in the field for space exploration and also actively engaged in emerging technologies such as quantum technologies, artificial intelligence etc.
Dr Jitendra Singh said, that the Centre for Augmenting WAR with COVID-19 Health Crisis (CAWACH) program carved out in a record time by DST just when Covid hit, was the first program by any department of Government of India to support Startups working on Covid products and solutions. He said, overall, the impact and outcome of DST’s program on innovation and entrepreneurship has been significant: promoting 160 incubators, nurturing 12,000 startups including 1627 women led Startups, generating 1,31, 648 jobs.
Dr Jitendra Singh informed that India has created a massive jump in its global ranking of Global Innovation Index (GII) from 81st in the year 2015 to 46th in 2021 among 130 economies of the world. India ranks 2nd among 34 lower middle-income economies and 1st among 10 Central and Southern Asian economies in terms of GII. The consistent improvement in the GII ranking is owing to the immense knowledge capital, the vibrant start-up ecosystem, and some outstanding work done by the public and private research organisations, the Minister added.
Secretary, DST, Dr. S. Chandrasekhar said, India in recent 7-8 years made some unprecedented progress in STI areas and there has been a significant rise in the country’s overall performance in terms of a number of publications (globally ranked 3rd now from 6th in 2013 based on National Science Foundation database), patents (globally ranked 9th in terms of resident patent filing) and quality of research publications (globally ranked 9th now from 13th in 2013) during the last 7 years. He pointed out that the NIDHI program of DST has swiftly processed the much-needed support to start-ups, catalysing the active support of Business Incubators and other business support providers.
Dr Jitendra Singh also inaugurated an exhibition of products of Startups in DST Utsav, as solutions to many of the pressing problems, many of which have been commercialised and are already in the market.
Dr Jitendra Singh congratulated the organisers, Team DST, Champions of innovation from all over the country – Startups, Incubators, Incubator Association ISBA and wish them a grand success for their ongoing efforts to catalyse the growth story of our great country and making the DST Startup Utsav a great success.