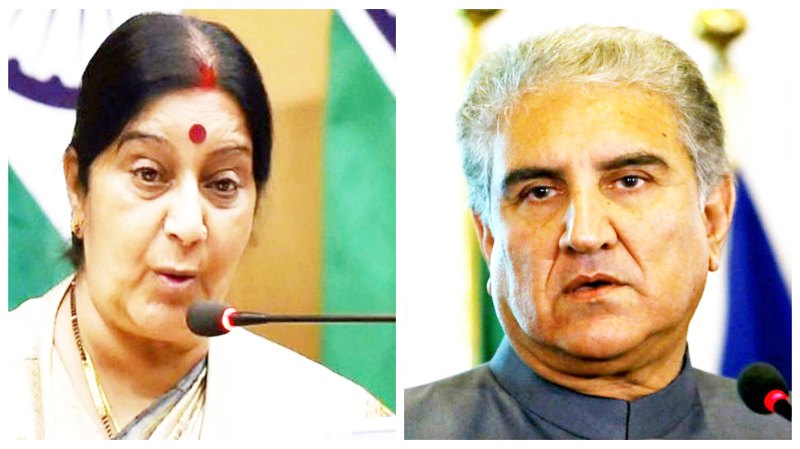 NEW DELHI, Sep 21: Barely 24 hours after agreeing to the engagement, the Government today called off a meeting between the Foreign Ministers of India and Pakistan in New York, citing the brutal killings of three policemen in Jammu and Kashmir and Islamabad releasing postage stamps “glorifying” Kashmiri militant Burhan Wani.
Announcing the cancellation of the meeting, External Affairs Ministry Spokesperson Raveesh Kumar said the incidents “exposed” the “true face” of Pakistan’s new Prime Minister Imran Khan to the world as well as Islamabad’s evil agenda behind the proposal for talks.

India yesterday accepted Khan’s request for a meeting between External Affairs Minister Sushma Swaraj and her Pakistani counterpart Shah Mahmood Qureshi on the sidelines of the United Nations General Assembly in New York this month.
“The latest brutal killings of our security personnel by Pakistan-based entities and the recent release of a series of 20 postage stamps by Pakistan glorifying a terrorist and terrorism confirm that Pakistan will not mend its ways,” Kumar said.
He said both the “deeply disturbing” developments took place after yesterday’s announcement by India to accept Pakistan’s proposal for the meeting. However, according to media reports in Pakistan, 20 postage stamps on J-K, and “glorifying” Kashmiri militant Burhan Wani were released on July 24 this year.
Three policemen were abducted from their homes in South Kashmir’s Shopian district and shot dead in cold blood by the Hizbul Mujahideen today.
Following the incident, opposition parties criticised the government and asked it to explain the rationale behind accepting such a meeting when Pakistan-based terror outfits are killing Indian security personnel along the border in J&K.
Kumar said India’s decision to agree to Pakistan’s proposal for the meeting was in response to the spirit reflected in separate letters from Khan and Qureshi.
“The letter from the Prime Minister of Pakistan had spoken of, inter alia, bringing a positive change and mutual desire for peace as also readiness to discuss terrorism.
“Now, it is obvious that behind Pakistan’s proposal for talks to make a fresh beginning, the evil agenda of Pakistan stands exposed and the true face of the new Prime Minister of Pakistan Imran Khan has been revealed to the world in his first few months in office,” he said.
The MEA spokesperson said any conversation with Pakistan in such an environment would be “meaningless”.
“In view of the changed situation, there will be no meeting between the Foreign Ministers of India and Pakistan in New York,” he said.
Reacting to India’s decision, Pakistan Foreign Minister Shah Mehmood Qureshi alleged that there is a group in New Delhi that does not want talks to happen.
Qureshi was also quoted by the Express Tribune as saying that India has not responded positively to Pakistan’s invitation for dialogue. “It seems that India is already preparing for its elections due in the country next year…Pakistan had asked for the talks in the larger interest of the region,” the report further quoted him as saying.
The Swaraj-Qureshi meeting would have been the first such high-level engagement between the two sides since suspension of dialogue between the two nations after the Pathankot air base terror attack in 2016.
India-Pakistan ties have nose-dived since then in view of a number of terror strikes by Pakistan-based groups. India retaliated by carrying out ‘surgical strikes’ in September 2016 across the Line of Control (LoC). India has been maintaining that terror and talks cannot go together.
Accepting the proposal for the meeting, India had, however, made it clear that it was not resumption of dialogue and the decision doesn’t change the country’s position on cross-border terrorism.
India’s acceptance had also come a day after the killing and slitting of throat of a BSF jawan in Jammu, for which the security force lodged a protest with Pakistan Rangers, terming the act as “unsoldierly”.
Reacting to the government’s decision, senior Congress leader Abhishek Singhvi said, “Better late than never. And sometimes credit should also be given to us.” (PTI)