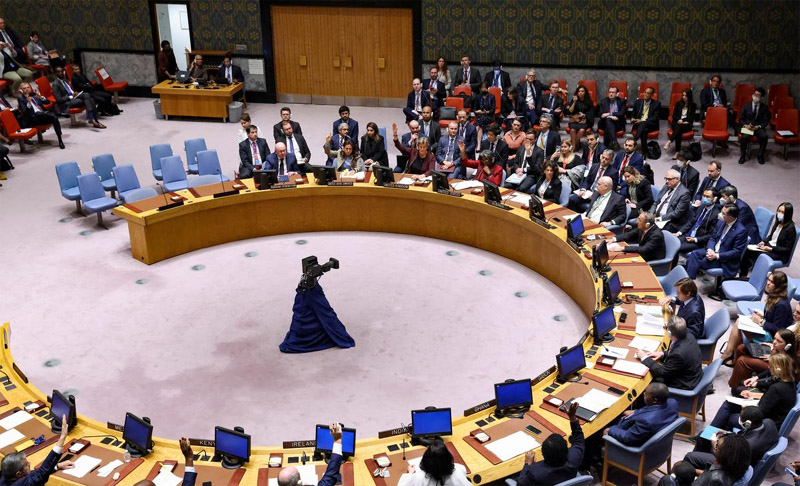 UNITED NATIONS, Oct 1:
India, citing the “totality of the evolving situation,” has abstained on a UN Security Council resolution, vetoed by Russia, that would have condemned Moscow’s “illegal referenda” and declared its annexation of four Ukrainian territories as invalid.
The 15-nation UN Security Council voted on Friday on the draft resolution tabled by the US and Albania on “Illegal So-Called Referenda in Ukraine”, hours after Russian President Vladimir Putin, in a lavish ceremony in the Kremlin, signed treaties to annex the Ukrainian regions of Luhansk, Donetsk, Kherson and Zaporizhzhia.
The resolution failed to get adopted as permanent UNSC member Russia vetoed it. It was supported by 10 of the 15 members of the Council, while China, Gabon, India and Brazil abstained.
Addressing the Council after the vote, India’s Permanent Representative to the UN, Ambassador Ruchira Kamboj, said that India is deeply disturbed by the recent turn of developments in Ukraine and New Delhi has always advocated that no solution can ever arrive at the cost of human lives.
“We urge that all efforts are made by concerned sides for the immediate cessation of violence and hostilities. Dialogue is the only answer to settling differences and disputes, however daunting that may appear at this moment,” she said in the explanation of the vote.
“The path to peace requires us to keep all channels of diplomacy open,” she said. Underlining that India’s position has been clear and consistent from the very beginning of this conflict, Kamboj said the global order is anchored on the principles of the UN Charter, international law and respect for sovereignty and the territorial integrity of all states.
“Escalation of rhetoric or tensions is in no one’s interest. It is important that pathways are found for a return to the negotiating table. Keeping in view the totality of the evolving situation, India has decided to abstain on this resolution,” she said.
US Ambassador to the UN Linda Thomas-Greenfield said before the vote that the outcomes of Russia’s “sham referenda were pre-determined” in Moscow.
“Everybody knows it. They were held behind the barrel of Russian guns. Time and time again we have seen the Ukrainian people fight for their country and their democracy,” she said.
“Earlier today, we saw Putin celebrate this clear violation of international law. He threw a party on Red Square to pat himself on the back for these illegal referenda. He is gloating and reminiscing about the Soviet empire and stated that this was just the beginning. As we all sit in this chamber and solemnly consider this resolution, Putin is instead boastfully shoving our shared values in our faces,” Thomas-Greenfield said.
She said if Russia chooses to shield itself from accountability, then “we will take further steps in the General Assembly” to send an unmistakable message to Moscow that the world is still on the side of defending sovereignty and protecting territorial integrity.
Russia’s Permanent Representative Vassily Nebenzia said before the vote that the results of the referendum speak for themselves and that the residents of these regions do not want to return to Ukraine.
“They have made an informed and free choice in favour of our country,” he said, adding that the referendums were carried out in full conformity with the norms and principles of international law.
He added that more than 100 international observers from Italy, Germany, Venezuela, Latvia, and other states, who monitored the voting, also recognised the results to be legitimate. “Washington which today is the loudest to criticise us and to speak of the territorial integrity of Ukraine recently declared that they were willing to use force to protect Taiwan which is an integral part of the People’s Republic of China,” he said. (PTI)