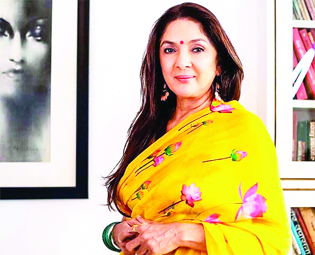 Justin Rao
Veteran actor Neena Gupta says staying relevant in the film industry is a constant struggle for actors irrespective of their age or experience.
A National Award winner with a career spanning more than 35 years, Gupta made her mark in films like “Trikal”, “Mandi” and “Utsav” in the 80s.
She rose to further acclaim with the 1998 TV shows “Saans” and “Siski” but work eventually slowed down in the 2000s, before she bounced back with consecutive hits, starting from Anubhav Sinha’s “Mulk” and Amit Sharma’s “Badhaai Ho” in 2018.
“The struggle never ends for anybody. From the top actors to the ones who aren’t famous, it’s the same. That’s what keeps you on your toes and I enjoy that sometimes. You can never be lazy. If a film becomes a hit, for one-two years you’ll bask in the glory and then what?” Gupta told PTI.
In 2017, the actor took to Instagram to ask for work, which eventually led her to bag “Mulk” and kickstart her second innings with films like “Shubh Mangal Zyada Saavdhan” and “Panga”.
The 61-year-old star said not everyone is keen to ask for work.
“I have heard about big stars who suddenly don’t have any work. Some of them get up and ask for work, some don’t and then they fizzle out. In this field, the struggle is forever.”
The actor is now gearing up for her Netflix series, “Masaba Masaba”, where she has teamed up with her fashion designer daughter Masaba.
The show is based on real-life moments of the duo and offers a peek into their journey, with references and anecdotes set against a fictional backdrop.
On the show, she plays Masaba’s mother, an actor navigating her way in the industry despite being told she’s past struggle.
Gupta said this happened to her when she wanted to be back on screen after she took a break post her marriage in 2008.
“For ten years, I didn’t work because I wanted to relax, live life comfortably. I didn’t want to work to earn money. But then I also realised that I needed to work for myself and that’s when I wrote the Instagram post, looking for work, calling up people.
“One day my husband said, ‘What’s the need now? You have done so much, ab kya zaroorat hai?’ I told him I want to do it because it is my need. So this did happen to me.”
Apart from drawing from their life, the show also presents the functioning of the film and fashion world.
Gupta said when she sat down to chat with the writers and director Sonam Nair, a line was drawn on what to spill and what to avoid.
“We told them about our lives, funny, serious all kinds of anecdotes. I remember when the script came, at one point I felt this is not showing a particular character in a good light. That it was a bit too much and not to my taste. I conveyed that to Sonam. It is a fun show, yes, but it should not cross the decency level which we were very careful about.”
The show marks the acting debut of Masaba and Gupta said though they were playing mother-daughter with references to their own lives, the lines “never blurred.”
“Before I started I was sceptical. I was also nervous for Masaba because it was her first time acting. But on set, it felt like I am doing just another role. If Masaba was with me in a scene, I would look at her and find her in that character.
“It was not a nervous daughter looking at her actor mother, asking, ‘Now what to do?’ Because of Masaba’s confidence, I felt at ease,” she added.
With Ashvini Yardi as a showrunner, “Masaba Masaba” also features Neil Bhoopalam, Rytasha Rathore and Samran Sahu. The show starts streaming on Netflix from August 28.