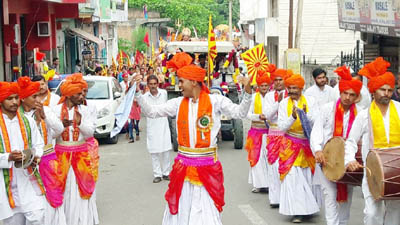 Excelsior Correspondent
UDHAMPUR, July 14: In connection with one day pilgrimage to Shri Pingla Mata Cave Shrine on July 16, an impressive Shobha Yatra was taken out today in Udhampur town.
The Shobha Yatra of Akhand Jyoti Adi Shakti Pingla Mata Ji was organised by Adi Shakti Sewa Sanstha Udhampur in which MLA Udhampur, Pawan Gupta was the chief guest while Swami Divyanand Puri Ji Maharaj was also present.
The Shobha Yatra passed through Hospital Road, Sallan Talab, Chabutra Bazaar, Main Bazaar, Gole Market, Mukerji Bazaar, Ramnagar Chowk and Salathia Chowk.
A large number of devotees participated in the Shobha Yatra singing devotional songs of the deity.
Beautifully decorated tableaus depicting different incarnations of the Goddess moved in the Shobha Yatra.
In morning, a ‘Havan Yagna’ was performed by the organisers.
Speaking on the occasion, Sanstha President, Ashok Kumar Gupta said that they are organizing 12th Pingla Mata Akhand Jyoti Yatra for which a Shobha Yatra was taken out today.
He said that the scared lamp and trident would remain at Pandav Mandir which would be carried to the cave shrine of Pingla Mata on July 16 in a religious procession.
Gupta also said that the Sanstha has managed free bus services for the devotees like every year from Udhampur to the pilgrimage point on July 16. He said that free langar facility would also be provided by the Sanstha at the shrine with support of the Sarpanch of the village Pinger, Mulk Raj Gupta.
Among other Ex-Sarpanch, Mulkh Raj Gupta; Sanstha Chairman, Baba Puran Nath; Vice President, Ajay Gudda; Cashier, Manik Shah, Ankush Gupta and members of the Sanstha apart from a large number of devotees participated in the Shobha Yatra.