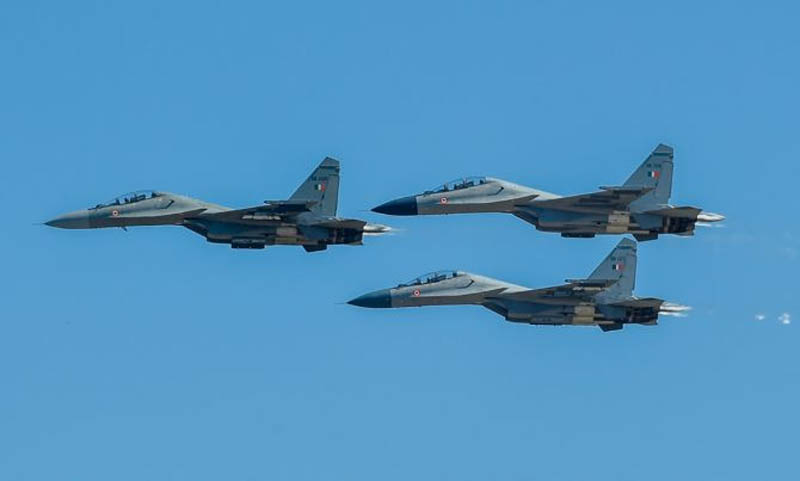 NEW DELHI, Oct 3:
The Indian Air Force on Monday said it scrambled its fighter jets following a bomb scare on a China-bound Iranian civilian plane that was flying over the Indian airspace.
An intimation was received of the bomb scare on an airline bearing Iranian registration, when it was transiting through Indian airspace, the IAF said, adding the plane was offered the option to land at Jaipur or Chandigarh but the pilots refused to divert.
“IAF fighter aircraft were scrambled, which followed the aircraft at a safe distance. The aircraft was offered the option to land at Jaipur and then, at Chandigarh. However, the pilot declared his unwillingness to divert to either of the two airports.
“After a while, intimation was received from Tehran to disregard the bomb scare, following which, the aircraft continued on its journey towards its final destination,” it said.
According to ATC sources, the incident happened on the Mahan Air flight W581 that was flying from Tehran to Guangzhou.
Meanwhile, a senior Delhi Police officer said they received a call about the bomb scare in a Tehran-China flight from the Air Traffic Control but soon they were informed by the ATC that the flight was not landing in Delhi.
“We got a call from the ATC informing us about a bomb scare in the Tehran-China flight. But as we were making arrangements, we were informed by the ATC that the flight was not landing in Delhi,” the officer said.
The IAF also said that all actions were taken by the force as per the laid down procedure, jointly with the Ministry of Civil Aviation (MoCA) and Bureau of Civil Aviation Security (BCAS).
It is learnt that the ATC at Delhi airport remained in contact with the IAF when the aircraft was in Indian airspace.
People familiar with the development said the Delhi ATC received inputs from the Lahore ATC that there was a bomb threat on the Mahan Air flight. Subsequently, the Delhi ATC informed the pilots but they decided to fly on.
As the aircraft did not follow the suggestion, laid down operational procedures were put into action, they added.
As per the flight tracking website Flightaware.Com, flight W581 is being operated with an Airbus 340-600 aircraft. It had taken off from Imam Khomeini International Airport in Tehran and was to arrive at Guangzhou Baiyun International Airport in Guangzhou.
There is no official statement so far on the incident from the civil aviation authorities as also the total number of people on board. (PTI)