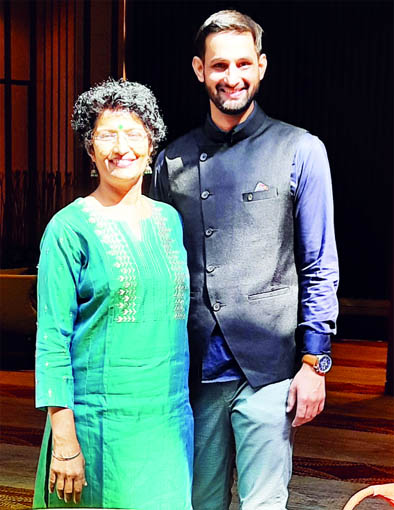 Recently an award-winning short film titled Mujhe Farak Padta Hai became a voice of thousands of homemakers not specifically for those who suffered from cancer but also for those who fight for themselves and their independence creating a difference in society.
Breast cancer is on the rise in India and sadly women report symptoms late, making treatment long and costly with increased suffering. Indian Cancer Society organized a video- making competition in association with Avon India with an objective to create awareness.
Directive Arts, Delhi’s leading film production house took the initiative and produced this film called Mujhe Farak Padta Hai under the direction of Angad Yagnik.
In a conversation with Daily Excelsior Correspondent he shares his experiences of film making and need for such a film.
Excerpts:
Q How was the title of this film selected?
A. “Mujhe Farak Padta Hai” is a cancer awareness film and the title was selected once the story was written.
Dr. Geeta Kadyaprath (breast oncoplastic surgeon at max hospital Vaishali) wrote these real situations which she experienced in her day-to-day OPD.
She has shared real-life experiences of what these cancer fighters are actually going through socially and personally. After converting these situations into screenplay this strong title comes up Mujhe Fark Padta hai. Script has 5 different situations (storyline) with its introductory poem. Every character in the story is dealing with different stages of cancer and family situations. The film starts with a poem explaining the hardship and suffering of women who deal with their family/social stigma.
Within a short span of time of 2 weeks, with the assistance of cancer survivors and non-actors, this film was made and won the 1st prize.
Later Team Directive arts were felicitated on the last day of the event at Natcon’s biggest online platform for medical students at Pullman hotel, Delhi. With everyone’s effort and belief, this became successful.
Q What made you take this subject?
A. I always wanted to make films that can create a difference in society and create awareness. I met Dr. Geeta Kadyaprath in 2015 with the idea of making a short ad film on breast cancer and since then I was associated with her and other doctors in making such short films like this.
Recently Indian cancer society organized a short film competition on cancer awareness for October month. We discussed with Dr. Geeta and she suggested taking up the story from a different perspective. Most of the ladies suffer and deal with their family/social stigma.
I am happy to make a film on such unspoken issues and become a voice for them.
Q Do you have experience in making such movies?
A. As I said earlier, I am associated with the healthcare industry for 5 years. I do have experience in making such films. “Mujhe Farak Padta Hai” is one of the unique films of all because of the treatment and energy it carries.
Q Where is the film available?
A. You can easily find this film on DirectiveArts social platform i.e YouTube, Vimeo, Facebook, Instagram. You can also check Dr. Geeta’s youtube channel .
Q Any other project in hand right now?
A. My upcoming project will be on Make in India skill development, right now it is on the R&D stage but sooner this subject will turn into a bigger project.
Q What is the USP that made it the best film?
A. “Mujhe Fark Padta Hai” in itself becomes its USP. Its unique and catchy title will make everyone watch this film once.
The treatment, dialogues, acting, choreography, etc made this film unique. Actors in this film are real cancer fighters and non-professional actors. They put their heart and soul in it and made each character so lively.
I feel when everyone’s hard work and energy were put in the right direction and brought out the message we were trying to convey and made the craft in itself unique.
Q Do you think that it would help in creating awareness about breast cancer in women?
A. I can’t say how much this would have impacted everyone’s mind but I am happy that we successfully brought out the problems of those women who suffer within themselves because of the dominating society around them.