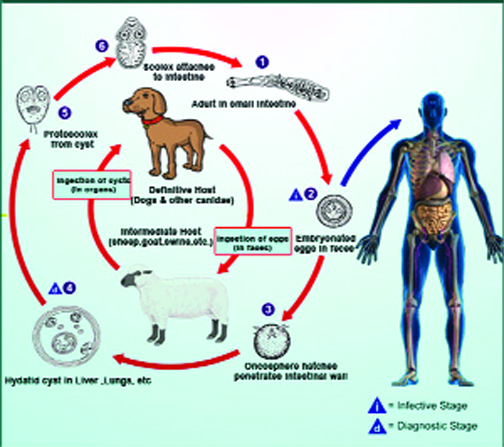 Amit Khajuria &  Anmol Khajuria
Hydatid disease (also known as hydatidosis or echinococcosis) is caused by a tapeworm which infects dogs, dingoes and foxes. At its intermediate stage, it forms cysts in the internal organs, especially livers and lungs, of a number of animals, including humans. In humans, the disease is so serious that it requires surgery for treatment. Hydatid disease also causes losses in livestock with the downgrading of edible meat by-products because of the presence of the hydatid cysts.
Hydatid disease in humans
Hydatid disease in humans can result only from swallowing eggs released from an infected dog, dingo or fox. Infection in humans was a common problem and death as a result of the disease was all too frequent. Although human hydatidosis was a notifiable disease in most states until 2001, it was frequently under-reported.
Children are the group at greatest risk of hydatid infection because of their close association with dogs and their sometimes casual approach to personal hygiene. Any dog that has had access to fresh offal, including livers from butchers, could be infected with this tapeworm.
Hydatids in humans is a serious disease. With improved diagnostic techniques, in particular computerised axial tomography (CT) and magnetic resonance imaging (MRI), whereby cyst lesions can be more easily identified, the danger of the disease has been reduced. However, the formation of cysts in the body is always dangerous and their surgical removal is never straightforward. A major concern during surgery to remove cysts is that brood capsules can float free within the cyst. If a cyst ruptures, the brood capsules can spread through the body and secondary cysts can grow wherever they come to rest. This contributes to the high level of recurrence (37.5% of patients). Steps taken to sterilise the contents of the cyst during surgery, and post-operative treatment with albendazole, will greatly reduce this risk. Deaths from hydatid disease still occur both before and after surgery.
The real tragedy of hydatid disease is that it happens at all, as the infection can result only from swallowing eggs released from an infected dog, or fox. This is an event that can be prevented by following the simple measures outlined below.
The hydatid life cycle. Each time an infected dog passes faeces, thousands of eggs may be released.
The control of hydatids
The control of hydatids involves ensuring that dogs are not infected with the tapeworm, either by preventing the dog from eating tapeworm heads or by cleaning out any tapeworms infecting it, preferably before they have had a chance to mature. Effective control methods include the following:
Feed only manufactured dog foods
These foods contain materials cooked in such a way that there is no risk of contamination by tapeworm heads in or on the materials used such as liver, lung or meat by-products. Also, the majority of commercial rations have been prepared under the direction of nutritionists specialising in such foods, and so contain all the nutrients essential for a balanced diet.
Feeding unprocessed meats or meat by-products to dogs carries with it the risk that contamination from ruptured cysts may have occurred during the slaughtering process, and, as a result, the dog could become infected. It is very difficult to cook meat at home adequately because of the time required to thoroughly heat the centre of a piece of meat. Commercial companies use pressure cookers which ensure that adequate temperatures are reached.
Prevent access to dead stock or fresh offal
Access by dogs to dead stock or fresh offal can be from scavenging or by the deliberate feeding of meat, liver, lungs or even blood from the slaughtering process. Hydatid cysts, which can be in the carcase or have contaminated the meat or other material, may be eaten by the dog, causing it to become infected with the tapeworm.
* Rural dogs: Dogs should be kept in kennels, in runs or on leads when not working or under supervision. Unsupervised dogs can find carcasses or, worse still, attack and kill lambs, sheep or other small stock. Sheep provide the greatest risk because they have the greatest proportion of viable cysts when infected.
* Suburban dogs: Legislation requires that all dogs in public places be under the direct control of a responsible person.
If you know that what your dog eats is safe and you know where your dog goes, you can make sure that no risk of eating tapeworm heads can occur and your dog cannot become infected with the hydatid tapeworm.
Wash your hands after handling dogs
Even though you take every precaution to keep your dog free from hydatids, you cannot be sure of the attention other people give to their dogs.
Before handling food, smoking a cigarette or, in fact, doing anything where your hands could transfer eggs from the dog’s coat to your mouth, you should wash your hands thoroughly. Teach your children to do the same, particularly after playing with dogs and before eating.
*Treat dogs which may have infection
If dogs have not been fed safe foods or if they have wandered away and there is a risk that they might have eaten hydatid cysts by scavenging, then treatment with a drug that is 100% effective against the hydatid tapeworm should be carried out. The only drug which is this effective at the moment is praziquantel. (There are 86 different registered products contain praziquantel, many of which are ‘all-wormers’ with activities against other worm types.) This drug is very safe to give to dogs and can be served in their food.
When treating potentially infected dogs, take great care in disposing of the droppings for 2-3 days after treatment. Numerous eggs from dead and dying tapeworms will be present in the droppings Dispose of them by deep burial or burning. These eggs pose a health hazard because they are not affected by the treatment.  Where a constant risk of infection occurs, treat the dog every 6 weeks to eliminate tapeworms before they grow to maturity and begin to release eggs.