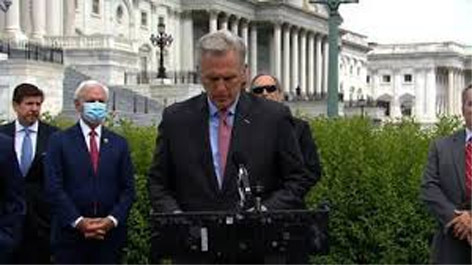 Washington, May 28:It was a day for the history books on Capitol Hill: For the first time, House lawmakers voted by proxy, an unprecedented move to avoid the risks of travel to Washington during the pandemic.
To mark Wednesday’s history-making moment, House Republicans sued to stop the Democratic majority’s new system, in which absent lawmakers can instruct those present to vote on their behalf.
The House rules change tries to strike a balance between working from home during the coronavirus outbreak and honouring the Constitution’s requirement to be “present” and voting. But it’s fast becoming a political test on party lines.
More than 70 Democrats cast their vote by proxy. Twenty Republicans joined the lawsuit against the move, which House GOP leader Kevin McCarthy of California says is unconstitutional. “It’s a dereliction of duty,” McCarthy said.
The House returned to Washington for an abbreviated two-day session as the city remains under stay home orders. The much smaller Senate is on recess after spending much of May in the capital.
Deadlocked over the next big coronavirus relief bill, Congress is shifting its attention to a more modest overhaul of small-business aid in hopes of helping employers reopen shops and survive the pandemic.
But the agenda is in flux. There were no formal talks between congressional leaders on the next phase of the federal coronavirus response.
Democrats have pushed a USD 3 trillion-plus measure through the House, but negotiations with the GOP-controlled Senate and White House have yet to begin.
“We can’t keep propping up the economy forever,” Senate Majority Leader Mitch McConnell said Tuesday in Lexington, Kentucky.
“The ultimate solution is to begin to get back to normal.” The day showcased the new proxy system. Republicans declined to participate, but dozens of Democrats — many from California and other Western states — submitted formal requests for proxy votes to the House Clerk.
Democrats engineered the rules change, approved earlier this month, that allows a lawmaker to formally ask a colleague to vote on his or her behalf. A single lawmaker can carry 10 votes.
One by one, as voting was underway on the first bill, the Uighur Human Rights Policy Act of 2020, some 40 lawmakers rose to announce the proxy votes they represented.
They stated each colleague’s name and the person’s intended vote, and the actions were recorded. Some lawmakers represented up to 10 representatives, though most carried votes from just one or two.
Not even during the Civil War, the Spanish Flu or any other emergency has the House allowed proxy floor votes. Voting dragged for more than an hour, with the House already operating under social-distancing rules that complicated proceedings.
Only limited numbers of lawmakers, many wearing masks, are allowed in the House chamber at once to vote. The Uighur sanctions bill was approved and other votes followed.
Republicans, in filing the lawsuit Tuesday, said the new system threatens the legitimacy of House-passed bills, calling into question whether they will stand the constitutional test. They want to set an example by returning to work as Trump encourages businesses to reopen.
House Speaker Nancy Pelosi, D-Calif., called the lawsuit a “sad stunt.” The nation’s virus-related death toll reached 100,000 Wednesday.
Erwin Chemerinsky, dean of the law school at the University of California, Berkeley, expects the suit to be dismissed. He said the Constitution allows the House to make its own rules, and federal courts generally don’t get involved with the internal governance of another branch of government.
“Most of all,” he wrote by email, the suit “ignores the extraordinary circumstances and the reasons why this is needed to allow the House to do its business and still be safe for members and staff.”
It appears the House could be out of session for much of June as well. Under the new rules, proxy voting is allowed only under emergency conditions, for 45 days at a time.
Congress is at a crossroads on the next virus relief bill. Democrats tout their 1,800-page bill as an opening salvo in negotiations, but Senate Republicans are wary of another round of negotiations where Democrats and the White House call the shots.
Republicans are also split on how much aid to provide state and local governments, as well as other parts of the Democrats’ proposal.
Even as they hit “pause” on a larger bill, Republicans are enthusiastic about improving the Paycheck Protection Program, which was established in March under the USD 2 trillion coronavirus relief bill and was replenished last month. All told, Congress has provided about $660 billion for the program.
Bipartisan legislation would give small employers more time to take advantage of federal subsidies for payroll and other costs. It was expected to pass the House this week. (AGENCIES)