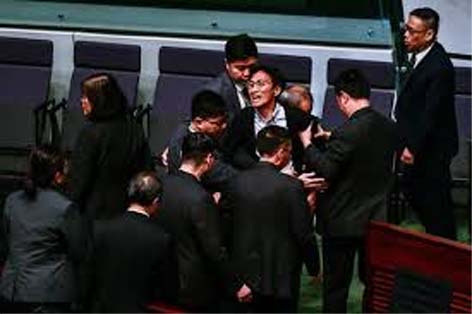 HONG KONG, Jan 16: Multiple Hong Kong opposition lawmakers were ejected from the legislature on Thursday as they heckled the financial hub’s pro-Beijing leader in angry scenes highlighting the stark political divides in the city after months of protests.
Security officials had to be called in multiple times to force out pro-democracy lawmakers who shouted slogans and held placards, including one that portrayed the city’s chief executive Carrie Lam as a vampire with bat wings.
Lam was at the Legislative Council for a question and answer session.
The last time she appeared in the legislature in October, the heckling was so sustained that she abandoned a state of the union style address and delivered it by video instead.
On Thursday, she was able to make both her opening speech and answer questions but was frequently interrupted.
Among the slogans shouted by lawmakers was “Five demands, not one less” — a chant used during the huge and often violent pro-democracy street protests that have battered Hong Kong for the last seven months.
The ferocity and frequency of the protests have died down in recent weeks but there are still rallies and occasional clashes with police while the unrest has helped tipped Hong Kong into a recession.
Among the key demands protesters are pushing for is an independent investigation into the police, an amnesty for more than 6,500 people arrested and fully free elections. Lam, backed by Beijing, has rejected those demands.
On Thursday she doubled down on defending the city’s police force.
“I would not accept any one accusing the police of brutality,” she said.
Pro-Beijing lawmakers also fielded Lam — who currently boasts record low approval ratings — difficult questions.
One asked whether she would take a pay cut while another asked her to explain what would happen to Hong Kong come 2047.
Under a deal with Britain ahead of the 1997 handover, China only agreed to allow Hong Kong to keep its freedoms for fifty years under a “one country, two systems” model.
“As long as we uphold the principle of one country, two systems… We will have sufficient reasons to believe that it will not change after 2047, and it will continue to develop steadily for long in the future,” Lam replied.
But she warned the protests might encourage Beijing — which tolerates no dissent on the mainland — to abandon the experiment.
Hong Kong’s protests have been sparked by years of growing fears China is already stamping down on the city’s freedoms.
The sense of crisis has been compounded by Beijing giving no indication that the city’s unique status will continue once the 50 year period runs out. (AGENCIES)