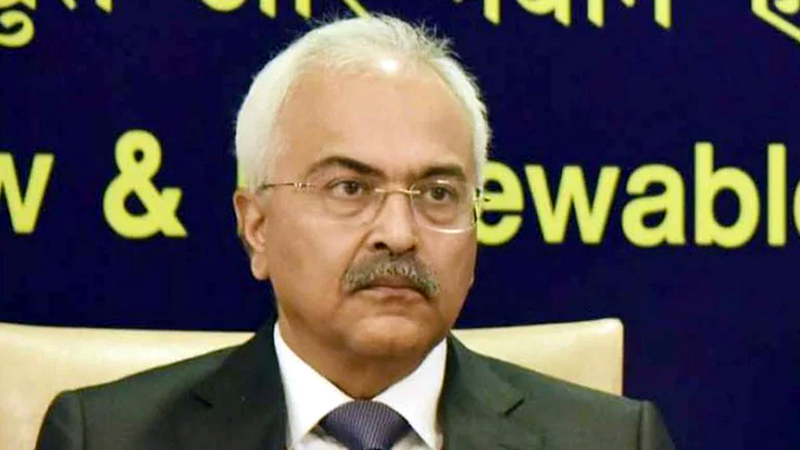 Sanjeev Pargal
JAMMU, July 6: Amidst new challenges posed by drone attacks in Jammu and Kashmir, Union Home Secretary Ajay Kumar Bhalla today reviewed security situation in the Union Territory especially the measures being taken to counter terror strikes using flying machines besides anti-militancy operations in the Valley at a high-level meeting in the Union capital.
Director General of Police (DGP) Dilbag Singh, Director General (DG) Intelligence Bureau (IB) Arvind Kumar, Additional DGP Jammu Mukesh Singh and other senior officials from the Ministry of Home Affairs were present at the meeting.
Sources told the Excelsior that security of sensitive installations especially security establishments came up for high-level review during the security review meeting as these kind of attacks were first not only in Jammu and Kashmir but entire country and have emerged as new challenge for the security forces especially in J&K which is battling Pakistan-sponsored militancy.
The J&K police chief as well as Jammu police chief were reported to have given detailed briefing to the Union Home Secretary on the drone strikes at Indian Air Force (IAF) Station in Jammu on June 27 and subsequent sightings of drones over military installations for next three days at Ratnuchak, Kaluchak, Kunjwani and surroundings.
“Steps taken by the security agencies for protection of security installations and crowded places from drone attacks and other kind of terror strikes by the militants were understood to have been discussed during the high-level review meeting,” sources said.
Two Indian Air Force (IAF) personnel were injured while minor damage was caused to one of the buildings in twin drone attacks at the IAF airbase in the wee hours of June 27.
Security agencies believed that the drones were launched from across the border opposite Indian forward village of Makwal which has shortest aerial distance from Pakistan. Further investigations in this angle are being done by the National Investigation Agency (NIA) which has been assigned probe into the drone attacks.
The drones that dropped the explosives were either flown back across the border or to some other destination during the night, sources said.
The aerial distance from the Jammu airport to the International Border is 14 km.
The IAF station located at the Jammu airport continued to remain out of bounds for everyone with probe teams picking up every bit of evidence available on the ground.
Security agencies believe that the drones were carrying RDX laden compact devices which were dropped at the Indian Air Force (IAF) installations after which the flying machines returned. Agencies also suspected the hand of Lashkar-e-Toiba (LeT) militant outfit behind the act as majority of incidents in which arms and explosives have been dropped through drones along the Line of Control (LoC) and International Border (IB) were handiwork of this outfit.
The ongoing counter-militancy operations and radicalization inside jails in the Union Territory were other issues which figured in the meeting, sources said, adding the Central Government was concerned about reports of radicalization not only in the rural areas of the Valley but also in the prisons and wants all steps to be taken to prevent this.
“With COVID situation now easing, the anti-militancy operations are being intensified,” sources said, adding the operations had taken a hit during past two to three months due to second wave of the virus. However, still a number of militants including top commanders of various outfits have been killed and arrested in the Valley.
As far as situation along the Line of Control (LoC) and International Border (IB) is concerned, sources said, it is by and large peaceful with no major infiltration attempts reported after latest ceasefire agreement came into force between India and Pakistan in February this year.