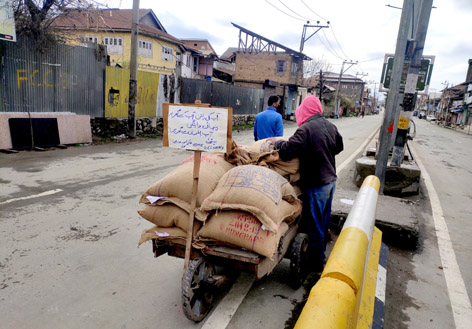 In extraordinary situation rather unprecedented of its kind like the current threat of the spread of Coronavirus, extraordinary steps are needed to be taken by the administrative system. We cannot dispute the multifarious obligations and commitments of the administrative set up in dealing with the emerged and emerging situation hence tremendous strain on its resources but priorities have to be identified and solutions found out. While making all arrangements in respect of fighting the dreaded disease on war footing is the top priority of the UT Government, at the same time it has to ensure that the people continue to get essentials of day to day requirements in a foolproof and duly planned manner. We appreciate, in this connection, the decision to arrange home delivery of ration to the consumers through dealers of the Department of Food, Civil Supplies and Consumer Affairs. It has also been decided that independent of dealers, the department could arrange delivery of food stuffs on its own.
Since the delivery is to start in a day or two, how the system works cannot be assessed right now but we have learnt that the process has been started in Udhampurdistrict where door to door service had already started. It was left to the discretion of the consumers to “lift” the ration of one month or both the months as the Government had already stated that two months’ ration would be supplied in advance. That is good to assuage people about sufficient availability of food grains and no basis whatsoever to nurse any apprehensions or go in for panic purchases. There are other nine districts to be covered under the facility for which there should be such a system evolved that on principles of parity and equitability, each and every consumer desirous to receive the ration should get the same at one’s door steps in order to discourage any type of breach of the protocol of the lockdown.
So far as Jammu district in particular is concerned, being purely urban in nature and also densely populated, the real acid test of the success of the scheme shall be how the supplies and distribution to individual households would take the shape of. Vehicles cannot go inside the deep narrow lanes and assembly of people in a crowded manner would defeat the purpose of the scheme in its totality, such a system therefore, had to be evolved that consumers get the same without any compromise in respect of keeping a minimum distance of over one metre inter-se. Hence, local ration dealers and even their agents, had to step in extensively in phased manner and in a well planned way. We hope, a preliminary survey of the areas and the mechanism of ensuring delivery of food items, must by now, have already been completed so as to give thumbs up to the delivery mechanism.
One aspect to be taken note of is that the ration in advance for two months and on regular monthly basis,was to be given to ration ticket or card holders only, what about those who did not possess one? Their number is no less .They too should invariably be covered under the arrangement in one way or the other. Help lines and other contact numbers must be made public on extensive awareness basis so as to seek help in getting essentials. That system was in an inactive or quite inappropriate way even in matters of supplies at doorsteps, of essential medicines required on daily basis for sensitive diseases like hypertension, diabetes, cardio vascular, thyroid etc. Fighting an emerged emergency of an unprecedented nature about which all types of uncertainties were rife, required cooperation from each and every segment of public administration and even from the social organisations was paramount.