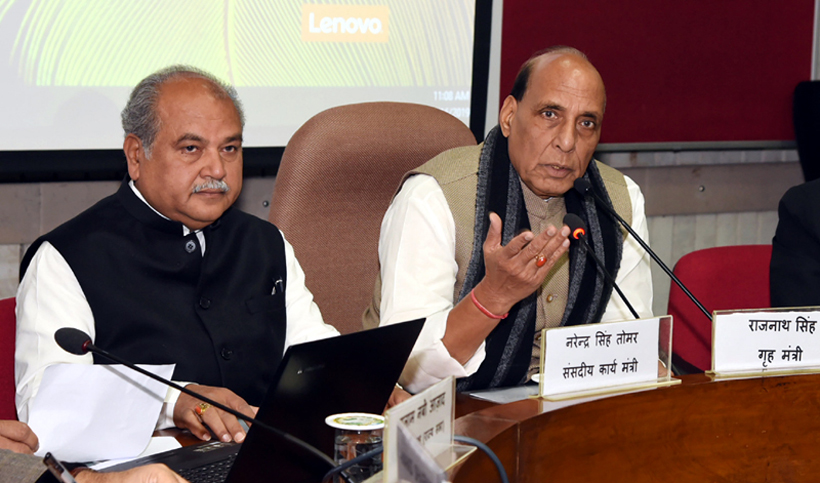 NEW DELHI, Feb 16: Home Minister Rajnath Singh today reviewed the security situation in the country, particularly in Jammu and Kashmir, two days after the killing of 44 CRPF jawans in an audacious terror attack in Pulwama, officials said.
The meeting was attended by National Security Advisor Ajit Doval among others.
During the meeting, top security officials briefed the Home Minister about the prevailing situation in the country, including along the Indo-Pak border, a Home Ministry official said.
The meeting took stock of the security measures in place to foil any design of the Pak-based terrorist groups to disturb peace in Jammu and Kashmir as well as in hinterlands, the official said.
The Home Minister directed the officials to ensure that all possible steps are taken to hunt down terrorists currently operating in Kashmir valley, another official said.
Those who attended the meeting include Union Home Secretary Ajit Doval and Director of Intelligence Bureau Rajiv Jain.
Meanwhile, the Centre today asked all States to ensure safety and security of the students and people from Jammu and Kashmir living in their areas in the wake of threats to them in some parts of the country, officials said.
A Home Ministry official said there have been some reports of students and other residents of Jammu and Kashmir experiencing threats and intimidation. “Therefore, the Home Ministry today issued an advisory to all States/UTs  to take  necessary measures to ensure their safety and security,” the official said.
Some Kashmiri youths studying in the Uttarakhand capital, Dehradun, have alleged that they were harassed and have been asked by their landlords to vacate accommodations fearing attacks on their properties in the aftermath of the attack. (PTI)