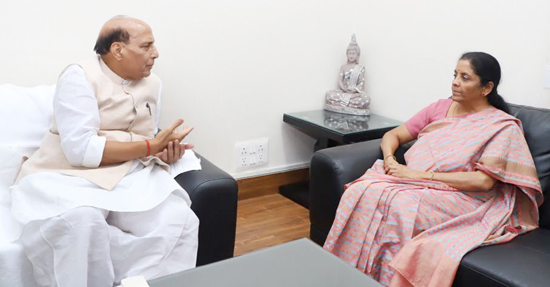 Sanjeev Pargal
JAMMU, June 1: Union Home Minister Rajnath Singh and Defence Minister Nirmala Sitharaman were today reported to have discussed Jammu and Kashmir situation including possible extension of conditional ceasefire after Eid festival at half an hour long meeting in the Union capital.
Rajnath is scheduled to visit Jammu and Kashmir next week on a two-day visit to review situation post-conditional ceasefire, which was announced by him on May 16 for holy month of Ramzan, which would normally conclude with Eid festival, unless extended further.
Sources said Rajnath was reported to have taken view of Sitharaman on possible extension of ceasefire beyond Eid festival. Though level of violence including incidents of stone pelting in the Kashmir valley have gone down, the militant attacks on security forces continued. Even there was no let up in infiltration of militants from Pakistan though majority of such attempts have been foiled.
Sources added that Rajnath wanted to take view point of the Defence Minister as Army was playing crucial role in
anti-militancy operations both in the hinterland of Kashmir valley as well as Line of Control (LoC), where recently a major infiltration attempt had been foiled with the killing of five militants.
Sources said both the Home and Defence Ministers were reported to have reviewed various aspects of situation of Jammu and Kashmir. The Union Home Minister was likely to discuss the issue with Prime Minister Narendra Modi before taking final call on extension or no extension of ceasefire.
Rajnath, according to sources, could announce his decision on conditional ceasefire during his two-day visit to the State next week during which he would visit both Jammu and Kashmir regions.
Rajnath had on May 16 announced conditional ceasefire in Jammu and Kashmir for the holy month of Ramzan i.e. suspension of operations against militants but maintained that security forces reserved the right to retaliate, if fired upon by the militants.
“The Home Minister has decided to himself take a review of security situation in Jammu and Kashmir in the aftermath of conditional ceasefire amidst indications from some quarters that the ceasefire can be extended if the level of violence goes down,” sources said, adding extension or no extension in ceasefire beyond Eid festival could depend on review of security situation by Rajnath with top brass of the J&K Government, heads of paramilitary forces, Intelligence agencies, operating in Jammu and Kashmir, and local police.
Sources said Rajnath would also take a view of the gains achieved by Centre’s Special Interlocutor on Jammu and Kashmir, Dineshwar Sharma in Jammu and Kashmir.
The Union Home Minister’s visit assumed significance as it comes close on the heels of India and Pakistan agreeing to adhere to 2003 ceasefire agreement on Line of Control (LoC) and International Border (IB) and separatists expressing their willingness to hold talks with the Centre with certain clarifications. Chief Minister Mehbooba Mufti has repeatedly been batting for Indo-Pak dialogue but Rajnath and External Affairs Minister Sushma Swaraj had recently stated that talks can be held with Pakistan only if it shuns terror and stop pushing militants into J&K.
During his visit in Jammu, Rajnath was likely to inaugurate two pilot projects of smart fencing along the International Border in Jammu, have a tour of the International Border and review facilities for the border dwellers including construction of bunkers, shelter homes, which could be re-designated as ‘Border Bhawans’ and other steps being taken for their welfare in the event of mortar shelling and firing.
Sources said peaceful Amarnath Yatra-2018 has been on agenda of the Union Home Ministry as this year duration of the holy pilgrimage in South Kashmir Himalayas was 60 days from June 28 to August 26 as against 48 days of last year. During Amarnath Ji Yatra-2017, militants had targeted a yatra bus killing eight pilgrims and injuring many others.