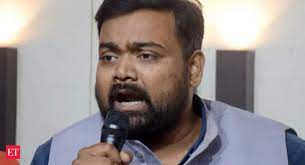 WASHINGTON, Sept 17: Empowerment of Dalits is at the core of Hindutva thought and the Indian Constitution, a senior BJP leader has said, noting that significant progress has been made towards their empowerment in the 75 years of India’s Independence.
Though discrimination is talked about more in relation to the Dalits, it is important to know how the empowerment of the Dalits is at the core of Hindutva thought and the Indian constitution, BJP spokesperson Guru Prakash Paswan said addressing the first edition of “Indic Dialogue” in New Jersey on Thursday.
Paswan, who is currently touring the US, addressed an audience in Silicon Valley as well as Los Angeles on a “Dalit Bahujan Solidarity Network”.
His interactions with the Indian diaspora at the “Dalit, Bahujan and Hindutva” event in Los Angeles and San Jose on “Policies of inclusivity and diversity of the Government of India” were covered at Foundation for India and Indian Diasporic Studies (FIIDS) at Fremont in California.
Assistant Professor of teaching Law at the University of Patna, Paswan told the audience in New Jersey that “Ramayana, Mahabharata, and the Constitution of India are the three documents that define Hindus and India”.
“All three are authored by Dalits (Ramayana by sage Valmiki, Mahabharata by Ved Vyaas, and Dr Babasaheb Ambedkar, the chairman of the drafting committee of the Constitution of India). So, where is the question of Dalit not being part of India?” he asked.
Paswan emphasised that atrocities on the Dalits happening in India and the history of oppression could not be denied nor minimised.
“It is, however, important to know what India is doing since 1950 (January 26, 1950, when the Republic of India gave herself the written Constitution) by enshrining Dalit empowerment, and also look at the results.”
In his speech, the BJP leader talked about reservations (affirmative action by the State), the Dalit chamber of commerce, impact of iconic Dalit leaders like Ambedkar, Babu Jagjivan Ram, (who former US National Security Advisor Henry Kissinger said was the “most hawkish defence minister”), former president Ramnath Kovind, as well as, current President Draupadi Murmu (first tribal woman to be the Indian President), a press statement said.
Paswan also talked about how various initiative of Prime Minister Narendra Modi’s administration like “PM Mudra” (finance for underfunded), Swachh Bharat Mission (clean India mission), governor appointees, recognition of Dalits for national civilian awards has continued to strengthen the agenda of Dalit empowerment.
During his talk, he drew parallels to the struggles of African-Americans in the USA and how some of the learnings from India could be applied to US polity and governance.
Indic Dialogue was attended by Woodbridge Human Rights Commission (HRC) chair Glenn Morgan, Woodbridge HRC Commissioner Rayshma Ali, Akshar Sidana, the member of Woodbridge Township School District Board of Education (WTSD BoE), and Woodbridge Public Library (WPL) Director Monica Eppinger.
Commissioners Morgan and Ali said they learnt about India, Hindutva, and Dalit issues while more engagement is needed. (PTI)