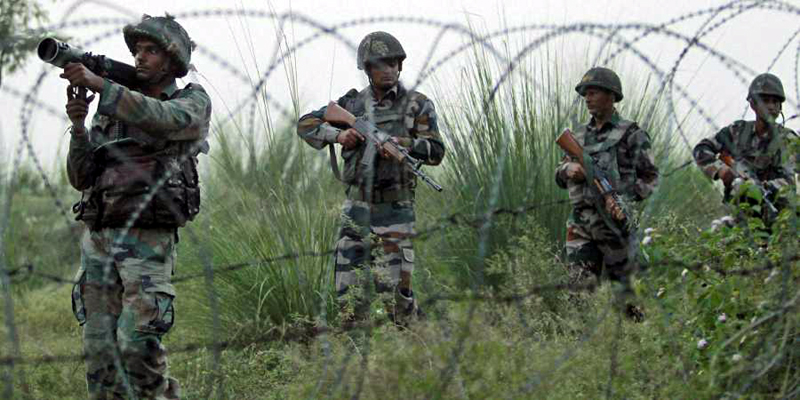 JAMMU, Sept 5: Pakistan army has moved an entire Brigade from peaceful area of Sialkot to the Line of Control (LoC) in Bagh and Kotli sectors opposite Poonch district of Jammu region, where Pakistani troops had regularly been resorting to ceasefire violations targeting forward posts and civilian areas amid reports that launch pads across LoC were full of militants waiting for an opportunity to sneak-in.
Credible inputs revealed that the Pakistan army’s Brigade, which was stationed in Sialkot district of Lahore province in a peaceful area has been shifted to Bagh and Kotli sectors opposite Krishna Ghati, Mendhar, Sabjian and Shahpur Kirni sectors along the LoC in Poonch district of Jammu region.
Indian Army has been closely monitoring the situation developing along the LoC and was taking all precautionary measures accordingly.
“Indian troops are fully alert and ready to meet with any eventuality on the LoC,” sources said, adding the Army has already given befitting response to Pakistan troops’ ceasefire violations on the LoC in twin border districts of Rajouri and Poonch inflicting heavy casualties and damage on their side.
Describing as significant the shifting of entire Brigade from peaceful area to the LoC, which was facing skirmishes between Indo-Pak troops since August 5 following abrogation of special Constitutional provisions of Jammu and Kashmir and bifurcation of the State into two Union Territories of Jammu and Kashmir and Ladakh, sources said Pakistan could use additional troops to escalate ceasefire violations on the LoC, push trained militants into Jammu and Kashmir for terror attacks and launch BAT (Border Action Team) attacks on the troops.
“There have been reports that Pakistan army has brought large number of Lashkar-e-Toiba (LeT), Jaish-e-Mohammed (JeM) and Hizbul Mujahideen militants to the launch pads on their side of the LoC with a plan to infiltrate them into the Indian territory to cause terror attacks,” sources said, adding that Pakistan army was in complete frustration due to failure of the militants to carry out any significant strike in the State post abrogation of special Constitutional provisions of Jammu and Kashmir by Narendra Modi Government.
They said the Lashkar and Jaish terrorists have moved towards the launch pads along with Special Services Group (SSG) commandos of the Pakistan army to make attempts to infiltrate into the Indian side of the LoC in batches for terror attacks.
However, the Indian Army hasn’t allowed Pakistan attempts to succeed by thwarting all infiltration attempts on the Line of Control aided and abetted by Pakistan army, sources said, adding the Indian troops are determined to ensure that the intrusion bids don’t succeed in any area along the LoC.
It may be mentioned here that Pakistan army had regularly been violating ceasefire agreement on the LoC in twin border districts of Poonch and Rajouri since August 5. Four Army soldiers and a civilian have been martyred in Pakistan shelling while 17 Pakistan army personnel were killed in retaliatory action by the Indian troops.
Pakistan army has also suffered heavy infrastructural damages in the Indian retaliatory firing.