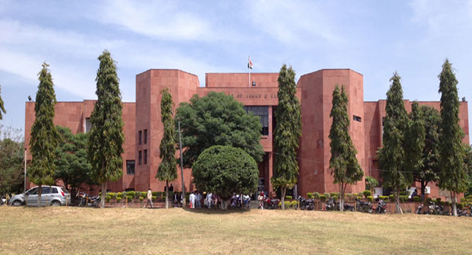 JAMMU, Nov 25: Dismissing the petitions which were impeding work on Jammu Ring Road, High Court of Jammu and Kashmir has said that judiciary’s interference in the creation of infrastructure of national importance should be minimal. However, it has directed that compensation should be transferred directly into the accounts of the land owners soon after the announcement of award by the Collectors so as to avoid harassment.
Some writ petitions were filed before the High Court on the ground that petitioners were being asked to vacate their houses though the land in question has not been acquired for Jammu Ring Road and no compensation has been paid to them.
It was further submitted that meagre compensation has been offered to the land owners for their fertile land and no notice was served either to the petitioners or other residents of village Chak Avtara in Bishnah whose land was acquired.
However, the counsel appearing for the project executing agency submitted that notifications under J&K State Land Acquisition Act were issued in the months of June and August 2017 and as the project was of urgent nature, the Land Acquisition Collector had announced the award in the month of October 2017.
It was further submitted that amount of compensation has already been assessed and even the compensation for the structures standing on the land owned by the petitioners was assessed. Moreover, entire amount of compensation already stands deposited with the Land Acquisition Collector, which the petitioners can withdraw after completing the formalities.
He further argued that an account of interim stay granted by the court the prestigious project has been put on hold, which otherwise will be a breather for Jammu city as the entire onward traffic will pass through this road. “Further, it will create infrastructural facilities in the border areas which is very important for the security of the nation”, he added.
After perusal of record and hearing counsel for the project executing agency, Justice Rajesh Bindal observed, “for the matters pertaining to acquisition of land for creation of infrastructural facilities, which are of national importance, interference of the courts should be minimal”.
Justice Bindal referred the observations made by the Supreme Court in Jaipur Metro Rail Corporation Limited Versus Alok Kotalwala and Others case wherein the Apex Court had stated that projects of immense public importance should not be put to halt on flimsy and untenable objections.
“The project in hand is for construction of Ring Road from Raya Morh to Nagrota with total length of 58.25 kilometres. It will not only ease out traffic problem in Jammu city but also work as a Ring Road, which will originate about 20 kilometres before Jammu city and will link the Jammu-Srinagar National Highway after crossing the Nagrota city”, Justice Bindal said while highlighting the importance of the project, adding “this will also create infrastructure facilities in the border areas for the smooth movement of armed forces”.
While dismissing the petitions, High Court said, “the instant writ petitions were filed in the month of November 18-more than one year after the announcement of the award by the Collector. There is no merit in the petitions particularly when the compensation has already been worked out and amount is lying with the Collector”.
However, before parting with the order, Justice Bindal said, “there is a need to protect the interest of land owners, who are very often swindled by the middleman during the process of disbursement of compensation or harassed by the officials in the office of the Land Acquisition Collector while disbursing the compensation for acquisition of land”.
Pointing towards the judgments of Supreme Court and High Court of Punjab and Haryana, Justice Bindal said, “the most sustainable way to avoid harassment of land owners in addition to lessening the time, energy and resources of the concerned department, subsequent to receipt of the particulars of land owners eligible for compensation, the amount should be transferred in the bank account of the land owners by the Collector directly and immediately after the award is announced”.
It is pertinent to mention here that Supreme Court has held that the Land Acquisition Collector shall depute officers subordinate to him not below the rank of Naib Tehsildar, who shall get in touch with the land owners and/or their legal representatives and inform them about their entitlement and right to receive compensation and the Land Acquisition Collector shall deposit the cheques of compensation in the bank accounts of the land owners after getting necessary information in this regard.
Justice Bindal has directed that the copy of the order be sent to Secretary, Department of Revenue and Secretary, Department of Law, Government of Union Territory of Jammu and Kashmir for strict compliance.