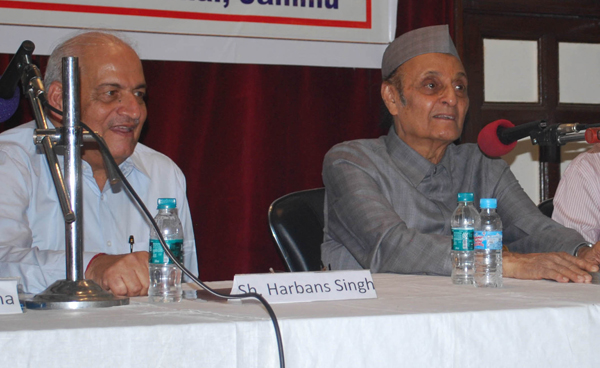 Excelsior Correspondent
JAMMU, Apr 23: Former Union Minister Dr Karan Singh said today that Jammu virtually remained unrecognized in other parts of the country and majority of people know the State by Kashmir only. The people outside treat whole of Jammu and Kashmir comprising Jammu, Kashmir and Ladakh as Kashmir only, he lamented.
Speaking at a Panel Discussion on ‘Karan Singh: Jammu and Kashmir (1949-1967) by Harbans Singh, Dr Karan Singh said even after 70 years of independence if you say today that you are not a Kashmiri while living in Jammu and Kashmir, the people will be surprised.

Click here to watch video
“People outside know Jammu and Kashmir by the name of Kashmir though this is a basic fact that Jammu, Kashmir and Ladakh are equal partners in the State. The people don’t know this basic fact even after 70 years of independence, which is quite unfortunate,” Dr Karan Singh asserted.
He said Jammu’s name came to the limelight by the incident of Rassana.
“What a disaster it is that Jammu is being known by the name of Rassana,” he regretted.
Dr Karan Singh said be it music or anything else, Dogra belt has been rejected. Rather, he added, the Dogri music has disappeared between Kashmir and Punjab because both of these regions are very strong.
“There is a misconception and false propaganda that I or my family has done nothing for Jammu,” he said, adding instead he had complaints with the people of Jammu that they didn’t give him what he deserved. He mentioned installation of idols in Ragunath Ji temple.
Dr Karan Singh declared that he will keep on serving Jammu.
“We have many movements to our credit. I and my family will continue to work for this region. The wrong propaganda in this regard has been set right by Harbans Singh through the book,” he said.
Harbans Singh also spoke on the occasion.