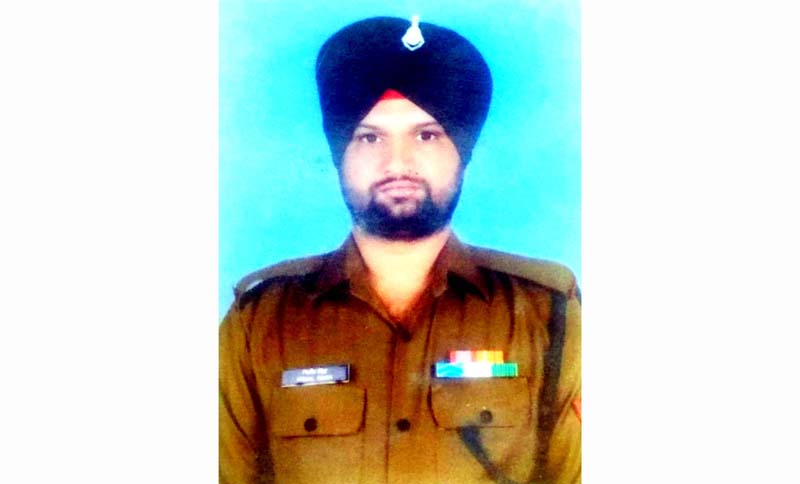 Excelsior Correspondent
JAMMU, Jan 21: An Army Havaldar was martyred as Pakistan resorted to heavy mortar shelling and firing on the Line of Control (LoC) in various sub sectors of Poonch district today even as the Pakistani troops also suffered heavy losses in the Indian retaliatory action.
Reports said Havaldar Nirmal Singh of 10 JAK Rifles was critically injured in Pakistan shelling and firing in Krishna Ghati sector of Poonch district and attained martyrdom.
He hailed from village Jansui in Ambala district of Haryana and is survived by his wife Gurwinder Kaur.
“Havaldar Nirmal Singh was a brave, highly motivated and a sincere soldier. The nation will always remain indebted to him for his supreme sacrifice and devotion to duty,” a Defence spokesman said.
Body of the martyr will be sent to his native village with full military honours tomorrow.
Meanwhile, Lieutenant Governor Manoj Sinha has expressed grief over the martyrdom of Havaldar Nirmal Singh in Pakistani firing at the LoC in Krishna Ghati sector.
Paying tributes to the martyr, he observed: “We are eternally indebted to our men in uniform for their supreme sacrifices towards ensuring integrity and sovereignty of the country”. He prayed for peace to the departed soul and strength to the bereaved family in the hour of grief.
Reports said the Indian Army retaliated the Pakistani shelling and firing effectively in Krishna Ghati sector leading to heavy exchanges between the two sides which lasted about one and half hours.
Pakistan side is reported to have suffered heavy damages and casualties in retaliatory action of the Indian Army but exact details couldn’t be ascertained immediately.
Reports, however, said that at least two posts of Pakistan army were hit in the Indian retaliation causing casualties of the troops across the Line of Control.
Pakistani troops also resorted to firing and shelling in civilian areas of Kirni, Kasba, Digwar, Malti and Khari Karmara areas of Poonch district. The Indian side retaliated effectively silencing the Pakistani guns.
Pakistan army has been shelling the Indian civilian areas on the LoC in utter frustration after suffering heavy damages and casualties at the hands of Indian troops.
It may be mentioned here that the Pakistani troops have been trying to push trained militants into the Indian territory under the cover of shelling and firing from the LoC in Rajouri and Poonch districts but the Indian Army has successfully thwarted the enemy designs.