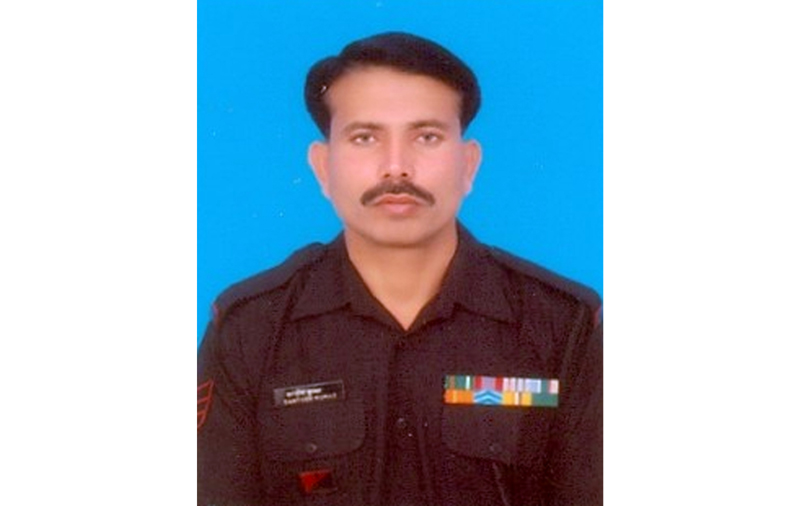 Gopal Sharma
JAMMU, Nov 17: An Army Havaldar attained martyrdom while two other soldiers received serious injuries as the suspected militants blew up an Army vehicle with IED, near the Line of Control (LoC) in Pallanwalla area of Akhnoor sector in district Jammu today.
Official sources told the Excelsior that incident took place at around 11 am when the soldiers were on routine patrolling in a medium Army vehicle along the LoC, near Raja Post in Pallanwalla sub sector of Khour Sub Division of Jammu.
Suddenly, an IED planted along the Kucha track near the fence, which was believed to be operated from that side of the LoC by suspected militants or Pak army, blew up the vehicle causing death of a soldier and injuries to two others.
Immediately after the incident, the Indian troops from the nearby locations rushed to the site. They cordoned the area and removed the critically injured Havaldar and two other jawans from the damaged vehicle to the nearby unit hospital where Havaldar Santosh Kumar of 4 Raj Rifles, hailing from Pura Bhadauria village in Agra (Uttar Pradesh), was declared as dead. The injured soldiers were later removed to Akhnoor Army hospital.
They have been identified as Naik Gemra Ram from Raj Rifles and Naik Krishan Lal from Armed Regiment.
A Defence spokesman said that suspected IED is believed to have been operated from the other side of the LoC. One of the injured soldiers, has been referred to the Command Hospital Udhampur in view of serious injuries. The condition of other, undergoing treatment at Akhnoor Army hospital, is said to be stable now. The body of the Havaldar, Santosh Kumar was sent to his home village in Agra after performing legal formalities by Khour Police this evening.
Meanwhile, Pakistani troops resorted to heavy mortar shelling in Degwar, Kirni, Shahpur and Qasba area of Poonch sector today.
Reports said at around 10.15 am, the Pak troops targeted Indian village Degwar near the LoC. Over a dozen shells landed in the fields and forest area but no damage or loss of life was reported.
Then again during this afternoon, the unprovoked shelling started from Pak side in Shahpur, Kirni and Qasba areas of Poonch. The Indian troops resorted to heavy retaliation. For about half an hour the intensity of shelling remained high but intermittent medium arms fire/ shelling continued for about two hours.
The shelling created panic in the entire area and people remained confined to their houses and some in bunkers. No loss of human life or damage to the property was reported. Walls of some houses of the people developed cracks and three cattle were injured in shelling.
Reports from Rajouri said that Pakistani troops also targeted Indian villages in Kalal and Jhangar area of Nowshera sector late this evening. The shelling lasted for about half an hour. The Indian troops gave befitting response, however, no damage on this side of the fence has been reported, the sources added.
Meanwhile, Pakistani Rangers resorted to firing on the Indian villages in Hiranagar and Kathua sector along the International Border (IB) late this evening.
Official sources said that the unprovoked firing from Pakistani side started at around 9.30 pm in Pansar, Manyari and Rathua area along the International Border. The BSF retaliated effectively and the firing was going on when the last reports came in. The scared villagers took shelter in the nearby bunkers while many remained confined inside their houses.