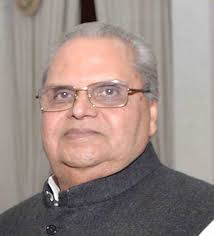 Security forces land, other issues resolved
Sanjeev Pargal
JAMMU, Dec 18: Governor Satya Pal Malik today held high-level review of security situation and requirements of Army, para-military forces and Jammu and Kashmir Police in a meeting at Northern Command Headquarters in Udhampur in which upcoming Parliament elections, construction of bunkers, situation on the borders as well as hinterland and land issues of security forces prominently figured.
This was first visit of the Governor to Northern Command Headquarters, where all top Army Commanders including Northern Command chief Lt Gen Ranbir Singh, GOC Nagrota Corps Lt Gen Paramjit Singh, GOC 15 Corps (Srinagar) Lt Gen AK Bhatt and GOC 9 Corps YVK Mohan were present among others.
Sources told the Excelsior that after successful conduct of Panchayat and Municipal elections, the upcoming Parliamentary polls also figured in the security review meeting though they are still 4-5 months away. However, the top brass of security was of the view that Lok Sabha polls will also be held peacefully like Local Bodies elections.
Apart from security review, the Governor directed that all land related and other requirements of the Army and para-military forces should be immediately fulfilled.
“Para-military forces have projected demand for land on outskirts of Jammu for a transit camp, Samba, Amb Gharota and some other places. The process for allotment of land will be expedited immediately,” sources said, adding that other issues of armed forces pending with civil administration will also be resolved.
The Governor directed in the meeting for close coordination among all security agencies, Jammu and Kashmir Police and civil administration.
Top officials briefed Malik on security situation along Line of Control (LoC) and International Border (IB) in the State including presence of militants on Pakistan side of the border and infiltration attempts by the militants. They said security forces were successfully thwarting the intrusion bids.
The Governor also reviewed progress on construction of bunkers for the border dwellers along LoC and IB and was given detailed briefing on ongoing work.
“Work on construction of bunkers has been expedited,” sources said.
They added that focus also remained on Kashmir situation, where security forces have succeeded in eliminating number of militants during past few days but civilian casualties during the operations, like the one witnessed in Pulwama recently, were cause of concern.
The Governor directed all security agencies to strictly adhere to Standard Operating Procedure (SOP) and exercise maximum restraint while dealing with the civilians. However, the strategy was to ensure that the civilians don’t reach the encounter site. According to sources, efforts would be made to keep the civilians away from the site of gun battles.
The Governor, according to sources, stressed the need of a heightened vigil and ensuring the safety of protected persons and the security of all-important establishments and installations. He stressed that all possible security arrangements should be made to protect vital installations, which have been on hit list of the militants.
Malik lauded the role played by the security forces in the incident free conduct of polls to the Urban Local Bodies and Panchayats, which were completed in the State on December 11.
He reviewed details of the counter-infiltration and counter-terrorist operations undertaken recently by security forces and called for strengthening Security Grids in the hinterland as well as the borders to keep the militancy and violence well under control.
He also re-emphasized the crucial importance of sustained collaborative action between the armed forces and State police with the civil administration in dealing with difficult situations particularly to ensure against the loss of civilian lives.
The meeting was attended by K Vijay Kumar, Advisor to Governor; Lt Gen Ranbir Singh, Northern Army Commander; B V R Subrahmanyam, Chief Secretary; Dilbagh Singh, Director General of Police; Lt Gen. A K Bhat, GOC 15 Corps; Lt. Gen. Paramjit Singh, GOC 16 Corps; Lt Gen YVK Mohan, GOC 9 Corps; Umang Narula, Principal Secretary to Governor; R K Goyal, Principal Secretary Home; B Srinivas, ADGP CID; Muneer Khan, ADGP, Security and Law and Order; A.V. Chouhan, IG CRPF; Abhinav Kumar, IG BSF Kashmir; Sanjeev Verma, Divisional Commissioner, Jammu and SDS Jamwal, IGP Jammu.